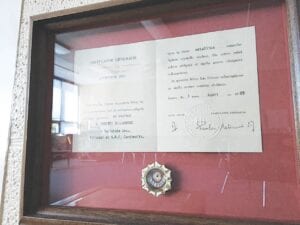 A relic of St. Pio on display at St. Robert Bellarmine Catholic Church.

On Sept. 20, St. Robert’s will display the relics of Padre Pio of Pietrelcina, an Italian monk of the Franciscan Order who was canonized by Pope John Paul II in 2002. The relic display will coincide with St. Robert’s 145-year anniversary and an outdoor Feast Day celebration.

Fr. Jonathan Perrotta, lead pastor of the St. Robert parish, said that his congregation is honored to host the relics of St. Pio, which were provided by an international society devoted to the saint and his legacy.

“Over a year ago, our diocese asked us if we wanted to sign up for a day to host the relics,” he said. “For us, it was providential timing—given that we will have them during our 145-year celebration.”

According to Catholic tradition, relics are physical objects that have a direct association to a canonized saint. Relics can include the bones of a saint, an article of clothing that the saint wore or an item that the saint owned or touched during his/her lifetime.

Perrotta said that relics are used as objects of veneration and intercession for parishioners as they pray to the saints for healing, protection and guidance.

“The reason we venerate relics is not to worship them, but rather as a point of communion with the saints,” he said.

St. Pio (1887-1968), born Francesco Forgione, is revered by many Catholics across the world for his charitable work and for miracles that have been attributed to him during and after his ministry. He grew up in a family of farmers in southern Italy before joining the Capuchin Franciscan Order at age 15 and becoming ordained in 1910.

In 1918, St. Pio received the stigmata in his hands, feet and side after having a vision of Jesus Christ. In Christian tradition, stigmata are the appearance of bodily wounds, scars and pain in locations corresponding to the crucifixion wounds of Jesus.

One relic that will be on display at St. Robert’s is a fingerless glove belonging to St. Pio, which he wore to cover the wounds on his hands.

Although the stigmata caused him great pain for the rest of his life, St. Pio dedicated much time to caring for the sick and poor and serving the spiritual needs of his parishioners in the small town of San Giovanni Rotondo. During the 1940s, St. Pio also founded a thriving hospital in the community.

Fr. Perrotta said that the chance to host the relics of St. Pio could not have come at a more opportune time for St. Robert’s, even in the face of disruptions and uncertainty caused by COVID-19.

“This is a great opportunity to grow in our relationship with the saints and to grow in our understanding of the Catholic faith,” Perrotta said. “It is also a moment of grace for us during this pandemic. We hope that it will strengthen us during this time, and that we will be responsive and know that God is with us.”