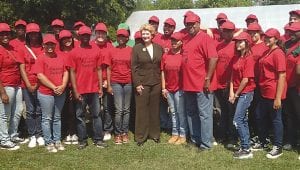 Debbie Stabenow visited Burton’s Mr. Rodgers Garden Program “Hoop House” Aug. 21. Stabenow is raising awareness for the Farm Bill. The Farm Bill is designed to boost the local economy, protect farming jobs, to protect the farmer in need rather than paying out money to thriving crop owners and to sustain an optimal food stamp program.

Stabenow, chairwoman of the Agriculture, Nutrition and Forestry Committee, met with members of the program at the gardens located behind Ebenezer Ministries on Center Road to discuss the 2013 Farm Bill and the benefits the bill has on farming jobs and the production and sale of locally grown foods.

Stabenow met with the program’s leaders and as well as with about 70-80 youth involved in the program.

The program, which is sponsored by Catholic Charities, provides mentoring to at-risk youth in Genesee County. Each youth person is paid to learn employment skills through the farming and marketing of the garden food by cultivating produce and selling it every Thursday and Saturday at the Flint Farmers Market.

The program director Greg Gaines has been with the program for 23 years and said the program has helped youth beyond the program by teaching them the skills to move on to college and management positions.

The Farm Bill is designed to boost the local economy, protect farming jobs, to protect the farmer in need rather than paying out money to thriving crop owners and to sustain an optimal food stamp program. Stabenow said the farm bill is currently in the House of Representative where it has remained since June.

Congressman Dan Kildee has been a proponent for the Farm Bill recently raising awareness of its importance by electively living on food stamps for a week along with other members of con- gress. Stabenow commended his efforts.

According to a news report, the senate proposed $4 billion in food stamp reform while House Republicans were asking for at least $20 billion in cuts, which is the largest cut in this generation.

The five-year senate farm bill would cut about $2 billion from the $80 billion a-year federal food stamp program. The bill would also strengthen crop insurance and cut and streamline programs to reduce the deficit by $24 billion.

Stabenow said the house is playing a tremendous amount of politics with concern to the Farm Bill.

The house turned down the bill in June because of concerns with the food stamps portion of the bill.

The house in turn passed a bill that dropped food stamps reducing the cost of the farm bill from $100 billion a year to approximately $20 billion a year.

Lawmakers have a Sept. 30 deadline to pass a bill or the deadline would have to be extended.

According to the Michigan Department of Agriculture, if every household spent $10 dollars per week on locally grown food it would generate nearly $40 million in economic activity in Michigan.

Stabenow’s visit to Burton is just a few places in Michigan she is visiting to promote locally grown food.

She was in Kalamazoo, Michigan Aug. 20 and was planning a visit to another city after her visit to Mr. Rodger’s .

Bernie Hatcher, one of the leaders who works with Gaines, said the farm bill would help create more jobs and help support the growth of locally grown food on abandoned lots in Flint.