Staff and students lauded by Carman-Ainsworth school board 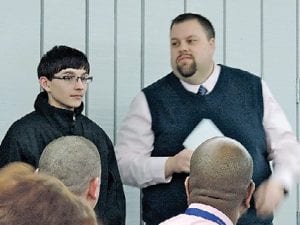 FLINT TWP. — The Carman- Ainsworth school board meeting last week started off like a mini Academy Awards show with several star pupils and staff members singled out for special recognition.

Four students and four staff members were honored and board members also got a pat on the back in recognition of January as School Board Recognition Month.

New this year is the Apple Award for Excellence which Superintendent Steve Tunnicliff described as an in-house recognition for staff members who demonstrate exemplary service. He chose the three inaugural recipients from about 15 nominations.

Tunnicliff said the recipients were chosen for going “above and beyond to deal with a crisis.” He declined to elaborate.

Also honored was Sue Warren for an achievement outside of the district. She is nominated as one of Michigan’s 2014 State Leadership Award winners. Warren is a congressional representative on the Board of Directors for the Michigan Association of State and Federal Program Specialists where she advocates fiscally responsible spending of state and federal grant funds. She will be feted at the NAFEPA Conference in Washington, D.C., in March. 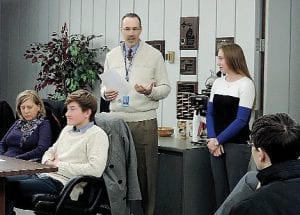 Board recognition certificates were presented to one high school student and three CAMS students.

Katlyn Koegel was the high school recipient introduced by high school principal Rory Mattar. A star pupil by any measure, Koegel, who is a senior with a 4.0 grade point average, was lauded for a lengthy list of achievements including marching band, the Flint Youth Symphony Orchestra and the Youth Leadership Team, She was chosen homecoming queen last fall and is president of the senior class and the National Honor Society.

Assistant middle school superintendent Brad Charmoli cited Bryce for being a hard worker, attentiveness in class, respectfulness to his teachers and being well-liked by his peers.

Darian was described by middle school assistant principal Rick Kalinin as a perfectionist.