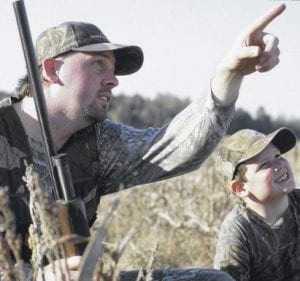 Parents may soon be the ones deciding when kids can safely hunt with no age restrictions.

LAPEER COUNTY — Kids may no longer have to wait to reach the age of 12 to legally hunt in Michigan.

On May 5, the Michigan Senate overwhelmingly voted 30-6 to approve Senate Bill 207 that would eliminate the state’s minimum hunting age. If approved by the House, House Bill 4371 would allow the creation of a mentored youth hunting program for all kids under the age of 10. Kids would then be allowed to hunt under the supervision of experienced adult mentors.

The bills are part of the national Families Afield campaign that began in 2004. It sought to increase youth hunting and banish the decades old restrictive age limits that kept the state’s youngest hunting enthusiast from taking part in hunting activities.

“Sportsmen should thank members of the Senate for overwhelming showing their support for the future of hunting in Michigan by passing Senate Bill 207,” said Jeremy Rine, U.S. Sportsmen’s Alliance associate director of state services. “The bill will help boost hunter recruitment and retention in the state by allowing new youth to safely try hunting under the watchful eye of an experienced adult mentor.”

Once the House bill passes as expected, the legislation becomes the state’s second Families Afield bill. In July 2006, then-Gov. Jennifer Granholm signed the first Families Afield bills that lowered the minimum youth hunting age to 10 from 12. It also created Michigan’s first apprentice hunting license for anyone aged 10 and over, who was contemplating or wanted to take part in Michigan’s vast hunting seasons and opportunities.

Then-Michigan Department of Natural Resources director, Rebecca Humphries had said of the new law, “Michigan’s abundant natural resources are conserved and protected each day by the men and women in this state who enjoy hunting and angling. Studies show that children display their natural interest in leisure activities by the age of 12, and by lowering the hunting age in our state, we can attract these youth hunters at the perfect age to get them interested in a lifetime of hunting and conserving our natural resources.”

Humphries had also addressed safety concerns about letting younger hunters take part in hunting and the safety issues that some may perceive.

First established in 2004 by the U.S. Sportsmen’s Alliance, the National Shooting Sports Foundation, and the National Wild Turkey Federation, Families Afield was designed to encourage and retain new generations of sportsmen and women to the field. Along with the National Rifle Association and the Congressional Sportsmen’s Foundation, the Families Afield coalition has worked to pass measures in 31 states with more than 598,000 apprentice or mentored hunting licenses sold since the program’s inception.

Idaho became the 31st state to sign a Families Afield program into law in May and New Hampshire signed similar legislation on May 12. Families Afield says that the safety rate of the supervised apprentice program has exceeded that of the average hunter. Ohio initiated a study in 2006 that shows that nearly half of hunters taking part in the apprentice license program went on to continue hunting. Supporters of the program have long said that parents should be able to decide when their kids are ready to hunt.

Apparently the rest of the nation took a wait-and-see approach, studied individual states’ programs and is now ready to join the majority of the country in offering hunting to its youngest citizens.