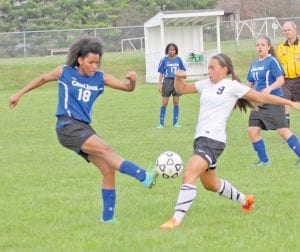 Carman-Ainsworth’s Natalia Avery and her teammates were eliminated from district play.

The Bobcats had reached the final by knocking off Lapeer 4-0 in the semifinals last Thursday. The Cardinals defeated Flushing 1-0 in the other semifinal to reach the title tilt.

Flushing had eliminated Carman- Ainsworth 8-0 in an opening round match last Monday. Grand Blanc beat Swartz Creek 4-0 and Lapeer defeated Oxford 1-0 in the other two opening round games.

The Bobcats faced Novi Tuesday in one regional semifinal at Bloomfield Hills. Rochester Adams and Brighton were in the other regional bracket. The winners of the two semifinals were scheduled to play today. – K.W.