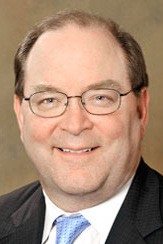 GRAND BLANC — State Sen. Dave Robertson (R-Grand Blanc Township), has announced he is launching his bid for re-election for State Senator of the new 14th State Senate district. Senator Robertson will be speaking with Michigan families about his consistent advocacy for them and their pocket books by highlighting his fight against Lansing’s usual tax-and-spend policies.

“Growing up as a son of General Motors worker, I’ve learned from a very young age that every hard earned dollar counts for Michigan families. I have always kept those lessons in mind and made them the foundation of my public service,” Robertson said.

Robertson said he considers himself a watchdog against harmful tax increases regardless of which party is in power.

From leading the Senate opposition to the new pension tax to passing legislation that cuts taxes on auto, boat and recreational vehicle purchases, Robertson said he has always been a champion of giving hardworking Michigan tax payers the relief and fairness they deserve.

“I understand that real leadership means finding real solutions to our state’s issues while respecting the sacrifice Michigan workers make through their tax dollars” Robertson explains. “The more tax relief we give to the people of Michigan, the closer our state regains its place as the economic engine it was and can be again.”