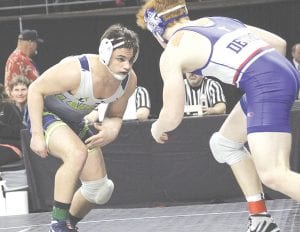 DETROIT – Since 2002, The Palace of Auburn Hills has been home to the individual state wrestling finals. Now, with the future of The Palace in doubt and demolition looming, the Michigan High School Athletic Association was forced to find a new home for the individual finals, choosing Detroit’s Ford Field for the 2017- 18 season.

The individual finals at Ford Field will introduce a new format that is slated for just two days instead of the traditional three-day event. It will also feature up to 20 mats that will cover roughly half of the football field. Seating will be configured to fit approximately 24,000 fans in the stadium’s lower bowl.

The MHSAA noted the contract with Ford Field is for the 2017-18 season only, but also stated there is a possibility of the event remaining at that site for additional years.

Meanwhile, the team wrestling finals, which were held at Central Michigan University’s McGuirk Arena for the last two seasons, have moved to the Wings Event Center in Kalamazoo for at least the next four years.

The site will feature all four championship matches on adjacent mats simultaneously, which was the format for the first 29 years of the tournament before it was changed last season to accommodate high attendance. Wings Event Center has seating for 5,100 fans with additional standing-room capacity for 1,000 more.

These wrestling changes are paired with the announcement that the girls’ basketball championship rounds will be moved from the Breslin Center at Michigan State University to the Van Noord Arena at Calvin College in Grand Rapids.

“It is with much gratitude to our recent hosts of the Girls Basketball and Wrestling Finals that we make these changes. But although we have enjoyed our time and relationships built, we also are excited to work with these next facilities and their staffs, who are similarly passionate about creating the finest experiences for our athletes and fans,” said MHSAA Executive Director John E. “Jack” Roberts in an MHSAA press release earlier this year on May 9.

“We received interest from a number of facilities and managers who also value what our championship events provide for teams and their communities, and we’re eager to begin working with Calvin College, Wings Event Center and our familiar friends at Ford Field and Northern Michigan University on these endeavors.”

This year’s team finals are scheduled for February 23-24 while the individual finals are slated for March 2-3.