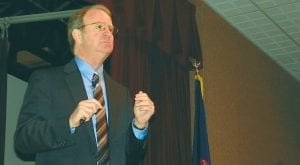 GENESEE COUNTY — You can’t spend years eating fattening, artery-clogging foods and expect not to eventually have a heart attack.

In his talk “Michigan’s Economy: Past, Present and Future,’’ Ballard likened the mostrecent recession that began in 2008 to a heart attack that without CPR (government intervention) could have led to the worst financial collapse since the 1930s.

The nation as a whole recently pulled out of that recession but Michigan’s recovery is lagging for many reasons.

Continuing the medical metaphor, Ballard said the patient is now sitting up in but still wearing a hospital gown and tethered to a IV but allowed to walk around a little. He pinpointed full recovery as far away as 2020.

“We got ourselves in this situation by dropping the ball on long-term issues,’’ Ballard said. “We are only going to be ready for 2020 when it comes if we start preparing for it now and that has to do with strengthening the skills of our labor force.”

Ballard’s recovery prescription also included some hard-to-swallow remedies including a luxury tax, a longer school year and redistribution of wealth.

“There is a menu of reasonable proposals that will not wreck our economy,’’ he said of his suggestions.

For one thing, Michigan needs to build a skilled labor force. In a typical month, as many as 20,000 jobs in Michigan can’t be filled because employers can’t find workers with the required skills, he said.

While prospering countries have a school year of 190 to 200 days Michigan is stuck in an old agricultural-based 180-day school years.

Thirty years ago, Michigan was evenly matched with Massachusetts in terms of education and income but now Mass. has a per capita income 50 percent higher than Michigan, the most highly educated workforce in the nation and better K-12 achievement, he said.

Some call it the politics of envy or class warfare but income inequality is a result of policies practiced over the past 40 years, Ballard said. He calls it the biggest economic story of his lifetime.

The future is hard to predict because of uncertainties. Last year, the Tsunami in Japan and European debt worries both impacted the U.S. economy, he said. But if nothing like that happens this year, 2012 will be a decent year of continued modest growth and recovery, he said.

Ballard’s talk was co-sponsored by Baker College and the Genesee Regional Chamber of Commerce.