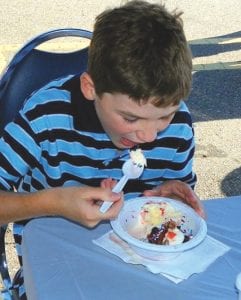 FLINT TWP. — Ice cream for dinner! What kid wouldn’t respond to an invitation like that?

That goes double for Evans Pincomb, 11. In fact, the Carman- Ainsworth Middle School student, was tucking into his second bowl of free ice cream, while his father stood by waiting patiently, at a back-to-school event sponsored last week by Club 93.7 radio station and VG’s grocery store, 5080 Corunna Road.

Held under a tent in the VG’s parking lot, the event was designed to treat families like the Pincombs to some “quality time before the start of the hectic school year,” according to a Club 93.7 press release.

Pincomb was one of 37 parents who pre-registered for the event on the radio station’s website but the free ice cream offer was open to anyone who drove up, while supplies lasted during the two-hour event.

Gene Pincomb and his 13-year-old son had each polished off a bowl a piece but Evans clearly was the family ice cream eating champ. He was all smiles as he scooped up his second helping generously covered with colored sprinkles. A variety of toppings were provided.

The idea behind the event was to break the rules by enjoying a non-traditional dish – just for the fun of it.

Gene Pincomb, who said his wife was at work, smiled indulgently at his son’s hearty appetite for the sweet treat.