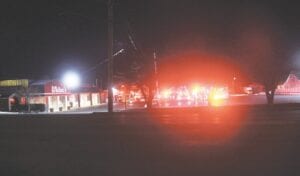 Davison firefighters and police were on the scene around 9 p.m. Dec. 31 for a report of smoke from Whitey’s Restaurant, 109 S. State Rd. Photo by Gary Gould

DAVISON — Firefighters were called to Whitey’s Restaurant, 109 S. State Rd., New Years Eve (Dec. 31) at approximately 8:30 p.m. for the report of a structure fire, which turned out to be a false alarm.

Assistant Fire Chief Jim Bratton said the call was prompted by excessive steam from the restaurant’s dishwasher. Police and firefighters were at the building assessing the situation just before 9 p.m., New Year’s Eve. — G.G.