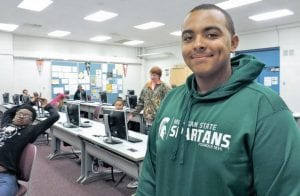 Tyler Perry, a CAHS senior, is also earning college credit in dual-enrollment courses offered at the high school by the University of Michigan Flint.

FLINT TWP. — Tyler Perry is a senior at Carman- Ainsworth High School (CAHS) but he will be halfway through his freshman year when he starts college next fall.

He is among students taking advantage of a dual enrollment program in which high school students can get a head start on earning college credits, at a substantially reduced cost.

Tyler, who is weighing a career as a nuclear or chemical engineer, said he enrolled in the program to save tuition costs but also because of the great need and income potential for STEM (Science, Technology, Engineering, Math)) workers.

“I have a passion for it and has a lot of passion to come back with it,” he said.

CAHS hopes to build upon the program starting next school year.

On October 6, C-A officials and the University of Michigan-Flint announced a new partnership to create a STEM Early College at CAHS beginning next school year, pending approval of the Michigan Department of Education.

Early College will offer dual enrollment beginning in 11th grade and carrying through to the 13th year (freshman year in college), said C-A Superintendent Steve Tunnicliff. The second year (12th grade) of the three-year program is the same as the program Tyler is now enrolled in.

C-A STEM Early College students will earn 44 college credits while earning their High School Diploma. Based on current tuition costs, students and families will save over $15,000 for this college jumpstart compared to the traditional college route.

“Research clearly indicates that high school students who enroll and complete college level courses while in high school have much greater chances of not only pursuing college education but also persisting and completing their degrees,” said Dr. Vahid Lotfi, Senior Vice Provost and Dean of Graduate Programs at the UM-Flint, who also oversees the Office of K-12 Partnerships.

“Carman-Ainsworth Schools has been one of our top feeder school districts, providing us with very high quality students each year. This partnership will further expand and enhance our relationship and will be of significant benefit to our communities.”

Enrollment in the Early College will be limited to 25 students each year. Current CAHS 10th graders with a cumulative grade point average of 3.0 or higher are eligible to apply. Details of the program will be shared with interested students and parents at three upcoming meetings:

°Parent/Student Meeting—Monday, November 23, at 6:30 p.m. in the CAHS Auditorium

“All C-A students are now learning STEM in an engaging, hands-on environment through the nationally recognized Project Lead The Way (PLTW) Launch curriculum,” he said.

“With all elementary students participating in PLTW Launch, we expect to see significant increases in the number of students electing to take PLTW Gateway courses such as ‘Design and Modeling’ and ‘Automation and Robotics’ at Carman-Ainsworth Middle School.”

By the time they get to high school, those students will be poised to select between the PLTW Pre-Engineering or Biomedical Sciences programs that lead directly into the STEM Early College, he said.