Stewart chosen as Flushing Rotary Student of the Month 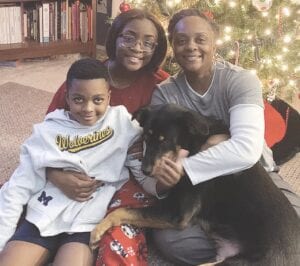 FLUSHING — Flushing High School senior Kennedy Stewart has been named the Rotary Club of Flushing’s Student of the Month for November.

Stewart, who will graduate this spring with the class of 2021, spent four years in the FHS Rotary Interact Club and has served the last two years as the Interact Secretary. She is also a member of Student Council, Key Club (Kiwanis) and the MAC Club—where she has helped to organize the decorating/birthday board in the school café.

Additionally, Stewart has been a member of the high school’s Peer-2-Peer Program, where she has mentored and assisted FHS students with special needs for the last three years of high school. She also played varsity tennis for Flushing in her junior and senior years (COVID-19 interrupted last season, which would have been her junior year).

Stewart has been described as someone who is always willing to help and volunteer her services. Her volunteering resume includes the Soup Kitchen, Peer-2-Peer Special Olympics (Mt. Pleasant), Rotary- s’mores at the Flushing Candlewalk, blanket-making for Hurley Medical Center, Very Special Art Day at the GISD and Night to Shine—which is a Prom/Homecoming Dance for students with autism or other special needs.

Stewart and her family have lived in Flushing for about five to six years. As the daughter of an Air Force nurse, Stewart had plenty of experience with moving from one location to the next as her mom was stationed in Elmendorf, AK., San Antonio, Texas, Albuquerque, NM. and Lakenheath Airforce Base in Brandon, England. Her mom, Erika Clarke, is now a nurse at Hamilton Community Health.

Stewart said that she aspires to be an elementary school teacher and plans to attend Mott Community College for one year before transferring to North Carolina A&T, an Historically Black College/University (HBCU) in Greensboro, NC.

As for other future plans, Stewart said she hopes to get married someday and have kids. She also plans to do lots of traveling and wants to continue to serve her community through service organizations such as Rotary and Kiwanis throughout her life. She said she has enjoyed her time as an Interactor at FHS and will miss the pep assemblies, Homecoming events, football games and just cheering for the Raiders.

Stewart also wishes to recognize the teachers who contributed to her success, including her tennis coach Mr. Mignerey (whom she refers to as her “school dad”) and Mrs. Peet, who has helped her grow as a person and has been helpful with her outlook on situations.

In her spare time, Stewart enjoys reading non-fiction titles, playing with her dog King, hanging out with friends and watching Criminal Minds on Netflix.

Stewart’s $100 award from the Rotary Club of Flushing will go to Gianna House, an organization that assists teen mothers.