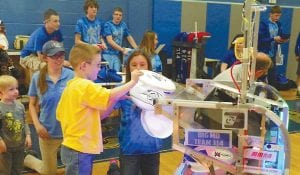 FLINT TWP. — Visitors of all ages, from toddlers to adults, got a chance to operate robots, shoot hoops and toss Frisbees with robots and learn more about building and operating robots, at an event last week held at Carman- Ainsworth High School.

The STEM (Science, Technology, Engineering, and Math) showcase was hosted by C-As robotics teams from all grade levels, which all had outstanding success this year in tournament competitions. The showcase included demonstrations, free food and a chance to learn about the advantages of a STEM education.

Building STEM lab classrooms at CA was one of the stated goals of a half-mill sinking fund increase voters were asked to approve in Tuesday’s election.

Emphasis on advancing STEM education is a national initiative to increase achievement in those subject areas where jobs of the future are expected to be most plentiful.

“STEM education is closely linked with our nation’s economic prosperity in the modern global economy,” according to the National STEM Education Coalition, which works with many groups to promote funding and development of STEM programs. It is touted as a critical element to national security and competitiveness. 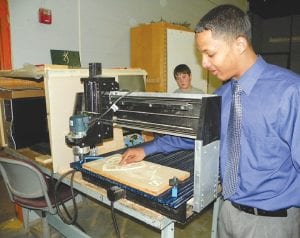 The event included a look inside C-A’s new Design and Build classroom where aspiring engineers like Shaquelle Polacek, a senior, have spent the school year learning to create computer-assisted woodcarving projects. 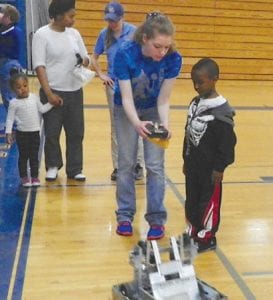 Top, young children got a chance to feed Frisbees to a complex robot used in competitions this year by the high school robotics team. Above, robotics team members were on hand to teach younger kids how to operate the controls of a robot.