Stretch of I-69 renamed to honor Bataan veterans 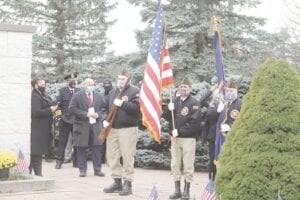 BURTON — A portion of Interstate 69, between Center and Belsay roads in the city of Burton, has been renamed the “Bataan and Corregidor Veterans Memorial Highway.”

Officials unveiled the sign at the Burton Veterans Day ceremony at the city’s Veterans Memorial and family of a Burton survivor of the infamous Bataan Death March in April of 1942 were on hand, along with many veterans, to see memorial sign.

In World War II, with little food or water and subjected to unspeakable atrocities at the hands of their Japanese captors, 9,000 Filipino and 1,000 American POWs perished in what became known as the Bataan Death March, a grueling 65-mile march from Bataan, Philippines, to Camp O’Donnell.

Mayor Duane Haskins told the crowd at the Nov. 11 Veterans Day ceremony that the renaming of that position of I-69 was due to the efforts of many local officials and residents, including City Councilman Vaughn Smith, Councilwoman Tina Conley, State Rep. Tim Sneller, County Commissioner Ellen Ellenburg and businessman Steve Welch. 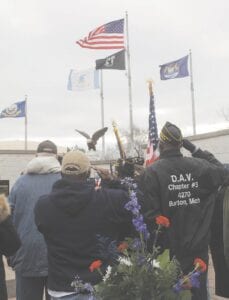 “It’s an historic day here in Burton,” said Haskins. “We’re so proud of our veterans.”

Present during the unveiling of the sign were family members of native Filipino Germino B. Fabro, who served as a private in the U.S. Army.

Bill Cokley, of Burton, told the View last year his father-in-law, Fabro, was always reluctant to talk about his experiences on the death march. He said Fabro was caught in the Battle of Bataan, was shot and was a prisoner of war for two years.

Members of the Cokley family were on hand for the ceremony and assisted Haskins in laying a wreath at the Burton Veterans Memorial.

The effort to rename a portion of I-69 began in 2019 when four Burton residents — Steve Welch, Vaughn Smith and Tony and Debbie Newton — joined thousands of marchers and runners in the Bataan Memorial Death March at White Sands Missile Range in southern New Mexico. 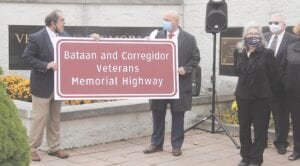 The four had known about the march for a few years, and Welch and Tony Newton are U.S. Navy veterans. When Welch met Cokley’s wife, Thet, the mission became personal.

“The marchers wear bibs with the names of survivors on them,” Welch told the View last year. “We asked Thet if we could have the honor of wearing her father’s name.”

Following the Bataan Memorial Death March, the four Burton worked with Jan Thompson, president of American Defenders of Bataan & Corregidor, to have a section of Interstate 69 designated Bataan Memorial Highway in honor of those who died and those who survived.

Eventually, State Rep. Tim Sneller brought the proposed renaming of the portion of highway to the state legislature where it was eventually passed by both the House and Senate.

“It’s my honor and I’m proud to be here today,” Sneller said at the Veterans Day ceremony. “I would be remiss here today not to thank our veterans and those who made the ultimate sacrifice for this county.”

Also present at the ceremony were veterans with the local Veterans of Foreign Wars Posts, the American Legion and the Disabled American Veterans.