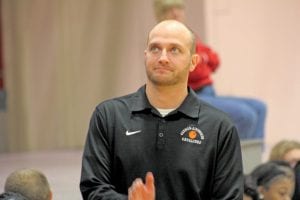 Second-year coach Lance Belill has led Carman-Ainsworth to its best record in at least nine years and its first league championship in school history.

FLINT TWP. – Carman-Ainsworth has its best girls’ basketball team in nearly a decade and will be looking for its third straight district championship when it opens play in the Class A tournament next week.

But it won’t come easy.

The Cavaliers are in a district field that includes ninth-ranked Flushing and honorable mention St. Johns, the host team.

Flushing, 17-2, is on a 17-game winning streak and coming off its second straight Metro League championship and an impressive win at second-ranked Class C Hamady.

St. Johns, 15-3, is in a three-way battle for first place in the Capital Area Activities Conference-Red with sixth-ranked Haslett and No. 7 DeWitt.

Carman-Ainsworth, 14-4, is unranked but coming off the first girls’ basketball championship in school history, having tied with Powers Catholic at 8-2 in the Saginaw Valley League-South. The Lady Cavs are also on a roll with eight straight wins, and they have two wins over Powers and another over 10th-ranked Class C Saginaw Nouvel.

Those are the key teams in the St. Johns district, which begins Monday with the Redwings taking on winless Owosso, 0-18. Carman-Ainsworth will meet the winner at 7:30 p.m. Wednesday. Flushing will play Swartz Creek, 9-7, in Wednesday’s other semifinal at 6 p.m. The final is set for 7 p.m. Friday, March 4.

Unlike the last two years, when they were led by high-scoring Sydnee McDonald, the Cavaliers have turned in their best season in at least nine years with a balanced lineup than can beat you many different ways. Seniors Randi Richardson, Harmany Williams and Chelsey Carpenter and junior Shakara Johnson are battle-tested veterans, and hot-shooting freshman Destiny Strother has led the team in scoring several times.

“This is a nice team to have because teams can’t focus on one player,” said second-year coach Lance Belill after the Nouvel game. “As soon as they do, we’ve got two or three other girls driving in for a layup and getting 8-10 points a game. It’s huge, and we haven’t had that in the past.”

The district winner will move on to the Owosso regional on March 8 against the Davison district champion, likely Lapeer. The other regional semifinal will contain either second-ranked Saginaw Heritage, No. 3 Midland Dow or Midland.

Carman-Ainsworth got a good look at Midland on Tuesday night, beating the Chemics 58-47 at Midland. Strother scored 23 points and Richardson had 11. Carman-Ainsworth was up 17-11 after one quarter, 29-19 at halftime and 42-28 going into the fourth quarter.

Last Friday the Lady Cavs clinched the first girls’ basketball conference championship in Carman- Ainsworth history by routing Flint Southwestern 52-24. Johnson grabbed a career-high 17 rebounds and Strother scored 11 points as the Cavs finished 8-2 in the SVL-South, tying Powers Catholic for the top spot. Carman-Ainsworth handed Powers both its losses in the league.

Williams and Richardson added nine points each and Johnson and Carpenter scored eight apiece. The Cavs led just 32-23 after three quarters but blew out the Knights 20-1 in the fourth.