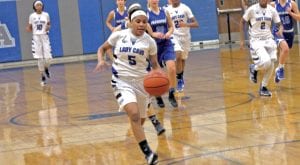 ST. JOHNS – Carman-Ainsworth’s girls’ basketball season came to an end March 2 in a 42-24 loss to St. Johns in a Class B district semifinal game on the winners’ court.

The loss brought an abrupt end to one of the Lady Cavs’ best seasons in the last decade as they finished 15-6, their best record in at least nine years. The 2013-14 team reached the state quarterfinals for the first time in school history but finished 17-8.

This team won the first conference championship in school history with an 8-2 record in the Saginaw Valley League- South, but the Cavs were no match for St. Johns, an honorable mention team in the final state poll. The Redwings (20- 3) went on to beat Flushing 37-31 in Friday’s district final.

Carman-Ainsworth fell behind 13-8 in the first quarter and trailed 25-15 at halftime. The Cavs rallied to within 31-24 on 3-pointers by Nakia Earley and Randi Richardson in the third quarter. But St. Johns’ tenacious defense shut out Carman-Ainsworth 11-0 in the fourth.

Harmany Williams led the Cavs with 11 points and Richardson finished with eight. Brooke Mazzolini led St. Johns with 12 points and Erika Ballinger scored 11, including three 3s in the first quarter.