Student athletes learn to be leaders 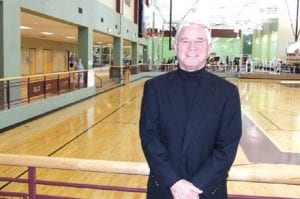 Bob Burek, a former Grand Blanc teacher, coach and principal, was one of the featured speakers at a recent athlete mentoring seminar held at the Genesys Athletic Club. The event included intense sports drills, short lectures, and mentoring opportunities from Greater Flint Sports Hall of Famers.

GRAND BLANC TWP.— Bob Burek said he was “thrilled” to be a part of the second annual conference for leadership for local athletes.

Burek, who has served in the Grand Blanc School District as a teacher, coach and principal, said they had even a better turn out than last year, with multiple schools participating in sending their athletes.

“The purpose is to promote, foster and encourage leadership,” said Burek, one of many who spoke to the students last week.

The event, hosted at the Genesys Athletic Club (GAC), in partnership with the Greater Flint Sports Hall of Fame, provided a leadership mentoring day for 160 student athletes from 17 local schools.

The half-day workshop took place Dec. 5. GAC chose to host this day to help students improve their leadership skills as athletes, in the classroom and as future community leaders.

According to Jim Mongrain, general manager of GAC, “Our goal is to provide these students with a solid framework for building leadership skills they can incorporate in all aspects of their life — not just as a team leader, but also as a classmate, friend and vital member of the community today and in the future. We are teaching them skills they can use for the rest of their life.”

Tim Wakeham: he is the Michigan State University head strength and conditioning coach for Olympic sports. Other mentors included were Cheryl Histed: she earned a total of 16 varsity letters in three sports at Kearsley High School: volleyball, basketball and softball. She was one of the most decorated female athletes in the history of the Big Nine conference. After high school, she went on to a record-setting volleyball career at Michigan State University.

Paul Stroba: he was all state in three sports at Matthew’s High School in Flint. He went on to play football with the University of Michigan and led the Big Ten in punting. After college, he played for the Cleveland Browns. Steve Schmidt: he is the head basketball coach for Mott Community College and claims the title of winningest coach in the college’s history with a record of 573 wins and 124 losses. He also is the winningest active coach in the nation at the NJCAA level.