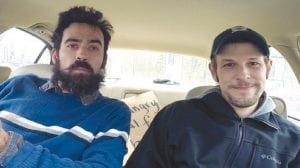 FLINT TWP. — All eyes were on Flint Township for many months while officials worked their way through crafting a controversial ordinance to address a growing panhandling problem.

The ordinance ultimately adopted in January and effective March 1 also caught the attention of two film students at Mott Community College, who are majoring in Media Arts and Entertainment Technology (MAET).

Guy Courts of Flint and Wade Longendyke of Davison decided to make the ordinance the topic of a project for their MAET Documentary Production class “because it was local, fairly easy to shoot, and a debatable issue with growing concern within the community,’’ Courts said.

Recently completed, “Spare Change” is 13-minute documentary that can be viewed online at www.youtube.com/watch?v=KUgUCFyyLoc

It also will be one of several student-made films featured at a public Showcase being held from 5:30- 8:30 p.m. May 20 in the auditorium of Mott’s Regional Technology Center,

“Spare Change” opens with a shot of Courts standing on a street corner once popular for panhandlers in the township. He is holding a sign that reads: “Homeless, Hungry and it is illegal for you to help.”

The township ordinance is patterned after a state law that makes it illegal to impede or interfere with traffic. It effectively prohibits panhandlers from stepping into the street to accept money or anything else from passing motorists.

A police officer showed up within five minutes of Courts and Longendyke filming their street corner scene, they said on film.

Courts explained on camera that he is not really homeless and that he and Longendyke are film students exploring the township’s panhandling ban and societal views of homeless people.

Their film includes footage from a local newscast when the ordinance was passed, an interview with Flint Township Supervisor Karyn Miller, several local people who oppose the ordinance and a homeless man panhandling on Center Road in Burton. The film ends with a poignant original song about “homelessness” penned by Josh Shirah of Davison, an up-and-coming musician,

Karyn Miller talked about being interviewed for the film at a recent meeting of the West Flint Business Association. She said she was skeptical at first but also saw it as an opportunity to clarify misconceptions that the township ordinance aims to penalize homelessness or infringe on free speech. She said she told the young filmmakers that their sign saying it was illegal to help the homeless was incorrect.

“You can stand out there all day if you want but the minute you impede traffic that is when the police will show up,” she said.

Township officials approached the panhandling resolution cautiously, beginning with a two-month grace period before the ordinance took effect, Miller explained. Police also used that time to hand out Resource Cards produced by the United Way to tell homeless, jobless, hungry, or addicted people where to go to get help from existing agencies.

“Our first goal is to get them off street and get them some help,” Miller said, adding that the ordinance has succeeded beyond expectations. Since the ordinance went into effect, township police have not handed out any warnings or violations, she said, noting that somehow the panhandlers got the message and moved on.

Courts and Longendyke also said they were unable to find any panhandlers in Flint Township when they began filming, so they reached out to one in Burton to get a point of view from a homeless person.

Miller said the young filmmakers told her they learned after talking to her that there are two sides to every story.

They received a high grade and positive feedback from their instructor who encouraged them to extend the film and submit it at some local film festivals, Courts said. But both are part-time students juggling full-time jobs. With a new semester and new film production classes starting up, they are content to publish their work on YouTube, Court said.

As for aspiring careers in filmmaking, they are taking it one step at a time.

“We are both having a lot of fun in this program and gaining a great deal of knowledge about the Media Industry,” Courts said. “Right now we are just finding our way and seeing where life takes us. Making films is a heavy process and we are experiencing every angle of it and enjoying it as it comes.”

Longendyke added: “While the process is very tedious and time consuming, it is both a pleasure and quite a learning experience to actually make a film. Like Guy said, at this point we’re enjoying it as it comes, but if it is what he wanted to do, I would apply to be his camera operator.”

Courts said that he and Longendyke work well together and may team up again in two more production classes both are taking.