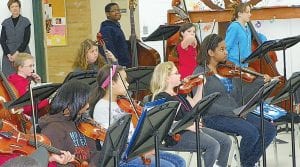 FLINT TWP. — Music is a universal language that harmonized into a splendid learning experience earlier this week for students at Carman-Ainsworth Middle School.

It was part of a cultural exchange of workshops and concerts with The Great Island Fiddlers, an awardwinning group of classical musicians, ages 12 to 17, from Cobh, Ireland, who were visiting the Flint area all week.

Carman-Ainsworth’s String Players — violin, viola, cello and bass — were preparing for a performance with the Fiddlers and the Flint Youth Symphony Orchestra (FYSO).

“They are very responsive,’’ Deloughry said, after working with the seventh graders.

He told the students his country was 5,000 miles away and from top to bottom is about equal to the distance from Flint to Chicago. 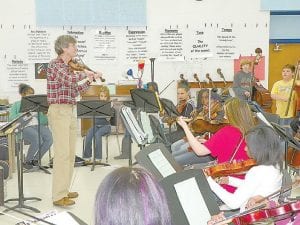 Seventh graders learn their performance piece as part of a cultural exchange with The Great Island Fiddlers.

Tuesday’s agenda called for the C-A students to play side-by-side with the Fiddlers to practice their performance pieces — a march and a jig. The Fiddlers also were scheduled to do two brief concerts in the afternoon for all middle school students, said Sue Miller, CA’s K-12 music coordinator.

On Wednesday, in a free 7 p.m. performance at Carman-Ainsworth High School, 38 middle-school students were to be featured in two songs with the Fiddlers and the Youth Symphony. The full concert offered a repertoire of traditional Irish dance tunes such as polkas, slides, jigs and reels.

Another free performance was set for 6:30 p.m Thursday at the Flint Institute of Music in the Flint College and Cultural Center, co-sponsored by the Flint School of Performing Arts.

Four Carman-Ainsworth students also are FYSO members, said Davin Torre, conductor of the FYSO. Other FYSO members who will be performing in the concerts are from all over the county and beyond including Flint, Goodrich, Davison, Swartz Creek, Grand Blanc, Holly, Fenton and Metamora, she said.

The FYSO toured Ireland in April last year and had an opportunity to meet and play with the Fiddlers. That’s how this came about, Torre said. The students continued exchanges on Facebook with one another and now the Fiddlers are returning the visit.

“That’s what children’s music is all about. It breaks down barriers,’’ Torre said.

In another fun educational exchange on Monday, CAMS seventh-grade flute players were introduced to playing a tin whistle by Jenny Ui’Loingsigh, an instructor traveling with the Fiddlers.

A tin whistle, aka Irish whistle, is a simple six-holed woodwind instrument commonly made of metal tubing with a plastic mouthpiece.

Most students in Ireland learn to play the tin whistle at an early stage before moving on to more complicated woodwind instruments, Ui’Loingsigh said.

Melissa Kenworthy, Carman’s 6-7thgrade strings teacher, was on hand to assist her students in learning the music.

What’s exciting about the CAMS strings program is that it is practically brand new, Miller said. Until last year, there hadn’t been a strings program at Carman-Ainsworth in 25 to 30 years, she said.

“We are so excited to be able to host this. We are so thrilled that our school board and our superintendent recognize the value of music education.’’