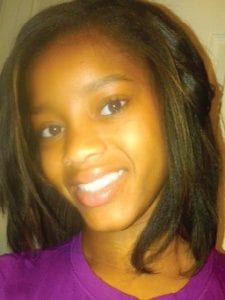 Rani Richardson, a junior at Carman-Ainsworth High School, recently returned home from six months of study as an exchange student in South Africa.

FLINT TWP. — After a nearly sixmonth stay in South Africa as an exchange student, Rani Richardson, a Carman- Ainsworth High School junior, recently returned home with a broader world view and greater appreciation of being an American.

Rani is the first Carman-Ainsworth student to travel with the Youth for Understanding international educational exchange program to South Africa, which began in 1995 after the end in 1990 of the country’s apartheid segregationist system.

She left home July 29 and returned Jan. 10. During her visit, she stayed with two different host families in Port Elizabeth, Eastern Cape and in Pretoria, Gauteng.

Her first month was spent in Port Elizabeth living with a white family who had never hosted an American student before. They had children ages 18, 28 and 30. During her stay there, Rani attended St. Marks, a small private Catholic school for grades r-12. Each grade had only about 20 students. 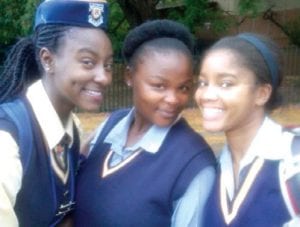 “In South Africa, everyone pays for school,” Rani said. “So basically, the more you pay, the better the quality of education is. St. Marks was a pretty good school. I made lots of friends and everyone knew everyone.”

Rani’s second home and school came with permanent placement in Pretoria, which is about a 45-minute drive from Johannesburg, There she lived with a black African host family, who had one 10-year-old daughter. The family had previously hosted an American exchange student from Seattle, Washington.

School work at both South African schools was different — some of it “rather easy” and some of it hard, Rani said.

“They do not focus on the ACT or SAT,” she said. “Rather, emphasis is placed on marks (grades). A mark of 80 was considered outstanding and earned a student distinctions and awards. I earned a few 80s while over there.” 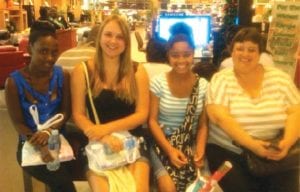 Meeting all the students, and learning about South African culture and languages were among the highlights of her trip, Rani said.

“What surprised me the most was in both of my schools, there was never a fist fight between students.” she said. In my entire time there, I do not recall anyone being suspended for being disrespectful towards teachers or other students. There really wasn’t much bullying or name calling. To be honest, I enjoyed being the new kid in school. I have attended Carman-Ainsworth schools all my life.”

She also got a kick out of seeing the new bank notes with Nelson Mandela’s face on them and also hearing a first-hand account of the hardships of life under apartheid from the grandmother of her second host family.

Rani learned to adjust to a different way of life. It was winter when she arrived in South Africa and most homes there do not have central air or heat.

“For about the first two weeks I was constantly shivering,” Rani said. “I slept with three hooded jackets and three pairs of pants on.”

Port Elizabeth is a coastal city and windy like Chicago, she said.

Weather played a role in daily life in Pretoria too, Every day, Rani had to check the weather forecast before hanging clothes to dry outside. It rained hard about twice a week in Pretoria, she said.

Her first host family had a dishwasher and clothes dryer but her second family did not.

“I usually never think about my clothes after I throw them in the dryer.” Rani said. “I had to get used to hanging clothes outside on the line, and not forgetting them.”

Other than that, both host homes had modern conveniences including electricity and indoor plumbing, she said.

Rani is not sure if she wants to visit South Africa again but would like to visit a Spanish-speaking country.

Rani came home “more proud to be an American,” she said.

“I watched the 2012 Olympics while over there. I cheered hard for the Americans in every event.”

Rani’s cultural sojourn did not change her career interest in becoming a radiologist. For now, she’s literally back on track. working out with

“I really missed playing sports and playing in the band,” said Rani, who is the daughter of C-A school board trustee Recco Richardson.. “I rarely exercised (in South Africa) because of safety reasons and workout facilities were hard to find.”

Her parting advice to her peers is: Take advantage of all the opportunities life affords you. We take lots of things for granted here in America. School and attending college is really important. Try to be grateful and remain humble.”

Founded in 1951, Youth for Understanding hosts exchange programs in 64 countries and has administered global travel for more than 250,000 students with an aim to foster cross-cultural understanding and world peace.