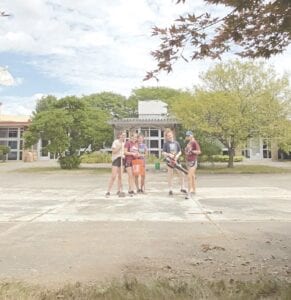 Students at work cleaning up one of the Davison Middle School courtyards. Photo provided

DAVISON — A group of high school students spent some time this summer cleaning up two courtyard areas at the Davison Middle School and there is hope of turning them into outdoor learning spaces in the future.

Abigail Howes, a junior at Davison High School, said the project came to be largely due to her mother, who was working in the middle school one day and noticed everything was overgrown and a mess.

Later that night Abigail said she and her mom talked about ways to better the community and earn some National Honor Society hours. So, after some planning the idea for the project was formed.

Abigail said she rounded up many of my friends, including Grace Dorman, Sydney Webster, Cianna Hill and Kylie Laux, as well as older brother Ethan Howes.

“We went into the project not really aware of the work entailed, but after the first day of work we realized that this would be a bigger project than expected,” she said. “Within the courtyard, across from the middle school office, the majority of our time there was spent pulling a variety of weeds, mowing the grass that lined the edges scraping the concrete pads clean and cleaning up any trash we came across.”

Matt Raible, custodian at DMS, was also a big help in providing the group with all the tools and supplies we would need to complete their task.

Abigail said the second courtyard, which was on the first floor by the art room, was mainly all grass so they just had to mow it all down. That, she said, was one of the easier tasks to complete.

“The main reason this project was one I choose to organize and partake in is because it was a project that would benefit the community and the children of the middle school,” said Abigail.

During the course of the project, Junior Sophia Biazza joined the effort.

She said she enjoyed the work and felt the group made a difference. With the clean-up project completed, Sophia said she’s started a GoFundMe account to try and raise money to put plants and perennials in the courtyards.

She said she’d like to see the school create an outdoor learning space for the middle school students to enjoy.

“This space would be perfect for distance learning,” said Sophia in her GoFundMe statement. “But, the courtyards lack color and excitement. With that being said we are asking for donations so we can get flowers and plants to put in.”

She said it would also be nice to plant some vegetables for a community garden and students in need.