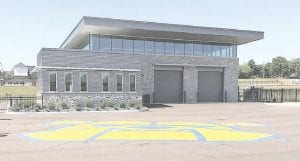 FLINT — On a 21-acre parcel where the first Chevrolet rolled off the assembly line 100 years ago, Kettering University has constructed a state-of-the-art research facility known as the Mobility Research Center, designed specifically for the engineering and development of autonomous and connected vehicles and the next generation of mobility systems.

The final phase of the facility was completed this past year. As one of just three major facilities like this in the state, the MRC features a three-quarter acre cement pad which can be customized for testing, a series of loops which form a nearly 1-kilometer track, and a research building with secure, fully-equipped laboratories featuring hydraulic lifts and fully-stocked toolboxes.

At the MRC, students can take part in advanced research and gain first-hand experience in development programs. Students are encouraged to use the facility outside of class—undergrads can use the facility with their professors to test prototypes, and members of the school’s AutoDrive™ Challenge team such as Robert Lyman and Viktor Ciroski use the space to prepare for competitions. 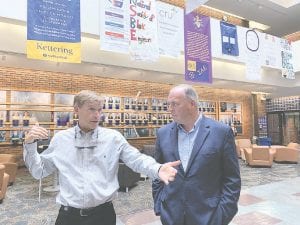 The AutoDrive™ Challenge is an event hosted by Mcity in which teams design and compete with autonomous vehicles, while using real-world applications and various technologies.

Dr. Diane Peters, who oversees the team, said she is proud of her student’s performance and their work.

The MRC isn’t used by just Kettering, though, she said. Corporations use the facility to research, develop and test new technologies in mobility and transportation.

Dr. Robert McMahan, the seventh president of Kettering University, described how the facility is currently used in researching a variety of programs, from autonomous driving and secure vehicle-to-vehicle and vehicle-toinfrastructure communications, to cyber security, artificial intelligence, mobile communication technologies, and so much more.

The MRC is already functioning as an innovation magnet for the State of Michigan, and Kettering is considered to be a front-runner in the advancement of new technologies, he said.

Congressman Dan Kildee (D-Flint) was on hand to express how valuable the MRC facility is to the area and surrounding communities.

Kildee said he thinks, for the reasons Dr. McMahan describes, the program’s impact reaches far beyond the walls of the campus.

Young engineers are increasing their knowledge and are able to prepare for the future. Yet, as the vehicle industry changes, the facility also allows for Michigan corporations to change with it.

The track allows existing programs in Michigan to adapt to meet demand sooner rather than later, while simultaneously preparing the next generation for what is yet to come.