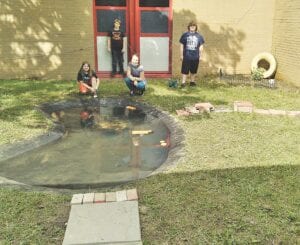 Students with the finished courtyard.

Dyer, who has just finished her first full year as a teacher with Bentley Community Schools, said she tries to make a difference in the lives of her students wherever she is teaching.

“My hope here in Burton is to connect with the community and increase my students’ environmental awareness and develop their problem-solving skills,” she said. “In Science Camp at Bentley Middle School we are growing a sense of community.”

More than a dozen middle school students have volunteered to work on transforming the Bentley Middle School’s forgotten school courtyard into “a welcoming and calming outdoor learning area” which will include a fish-filled pond and vegetable garden beds.

Dyer said on the first day the campers noticed the cement pond has not been used due to cracks and leaks, the evergreen tree next to the pond was also untrimmed and the grass was overgrown. 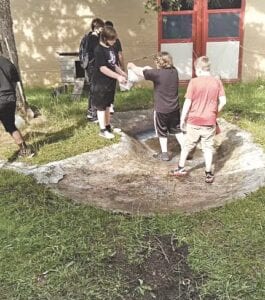 Students busy at work in the courtyard. Photos provided

The students decided on a student-led project and brainstormed the idea to turn the courtyard into a beautiful place to learn science and to relax and grow fresh food to include in their diets, she said.

“Our volunteer campers cleaned and repaired the pond with rubber sealant paint, they used the wheelbarrow to bring in soil and bricks, they handled gas powered tools and they built raised beds and planted vegetables,” said Dyer. “They also planted flowers from seeds in the corners of the courtyard. A staff member donated flowers and birdseed, a parent lent us pruning shears for the dead low-lying branches above the pond and our wonderful maintenance staff were more than gracious providing us with all the tools we needed.”

Dyer gave a special shout out to Sandy at Walker Farms in Burton who “graciously donated numerous vegetable plants and several bags of soil to help us reach our beautification goal.”

She said there is so much more to learn from gardening and landscaping than just teamwork, pride, and responsibility among students. Gardening encourages positive mental stimulation, she added.

“The mycobacterium vaccae found in the soil increases serotonin produced in the brain and improves brain function while boosting your mood,” said Dyer. “Working in the garden also reduces cortisol levels produced in response to stress and anxiety. All that lifting, bending, digging, and planting burns calories and strengthens the heart so there are physical benefits from gardening too.”

She said it is her hope to eventually obtain a donated greenhouse so students can continue to observe and learn during the colder months.

During the school year Dyer said her students learn about organic and genetically modified foods, why vegetables that ripen in the garden have more nutrients than some store-bought vegetables that must be picked early, they learn the five things plants need to grow and what kinds of fertilizers and pesticides come in contact with the food they eat as well as the Krebs cycle and photosynthesis.

She said it has been exciting to watch students working together and being inspired to want to learn more, but she adds the best part is she gets to know her students better and that develops respect and camaraderie that will never be forgotten. — G.G.