Kamrin Gold (left) and Jalen Walker stand with their schoolmates in the Carman-Ainsworth student section during Friday night’s basketball games.

FLUSHING — It’s been a tough year for Flushing High School students, and their peers over at Carman-Ainsworth took notice.

After the second death of a Flushing senior in two weeks — and third in a year — Carman-Ainsworth students organized a gesture of sympathy last Friday night during a basketball doubleheader in the Flushing gym. In between the girls’ and boys’ games, the students carried dozens of flowers over to the Flushing side of the gym and presented them individually to Flushing students and parents.

Flushing lost Brandon Spangler to an accidental shooting on Dec. 30 in Indiana, and Jarrod Nickell took his own life on Jan. 11. Flushing also lost senior Tom Smith to heart failure less than a year ago.

The school districts are neighbors and rivals in the Big Nine Conference, and co-op in hockey and swimming and diving, but the tragedies transcended those lines.

“ We just felt it was necessary to show our condolences,” said Carman-Ainsworth senior Kamrin Gold. “ We go to different schools, but we’re one big community. We wanted them to know we were feeling sorry for them and this is something they shouldn’t have to do alone.” 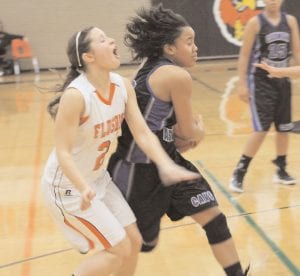 Jalen Walker, a drum major in the Carman-Ainsworth marching band and the school’s homecoming king last fall, initiated the move with the help of a teacher and several organizations in the school.

“Multiple organizations brought in funds to assist with the flowers,” Walker said. “ We bought them today (Friday). We had to go to three different stores because they were sold out, but we made it work. We knew it had to be tough for them and we wanted to do what we could to show support and sympathy.”

The Lady Cavaliers hit a snag on Friday, as they fell to 4-6 overall following the loss. The Raiders were able to outscore Carman- Ainsworth in three of the four quarters, with their biggest edge coming in the third, 27-7. The Cavaliers edged out Flushing in the second, 17-11.

The Lady Raiders were led by Simone Gillum who poured in a game-high 17 points, as well as Emily Wendling, who trailed just behind her with 16. Kacey Davidson put in 10 points, while Elisha Major recorded nine. The Lady Cavs will return to action at home on Friday for a Big Nine match up with the Flint Powers Catholic Chargers.