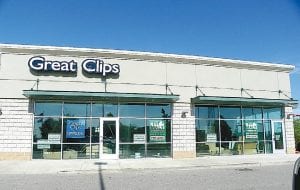 Hiring signs in the window notify the public about jobs at the soon-to-open hair salon located next to Rally’s hamburgers. Formerly a Starbucks Coffee shop, the two separate businesses will share the building.

FLINT TWP. — Licensed stylists looking for work have a chance to snag a job at the Great Clips salon, 4455 Corunna Rd., slated to open about June 9.

They plan to hire about 12 licensed stylists to work in the salon,

Clips is a national franchise specializing in affordablypriced hair cuts, styling and trims for men, women and children.

The Corunna Road location is the first of many the owner, who lives in Troy and is a former Buick City worker, hopes to open in the area. He was attracted to Corunna Road because of the good commercial and retail environment and demographics.

The building in located front of Lowe’s home improvement store and was formerly a Starbucks coffee shop. The front part of the building is now occupied by Rally’s hamburgers . Great Clips will occupy Suite B in the back portion.

The salon will be offering $4.99 haircuts during its grand opening.

The interior design is standard for that found at Great Clips salons.

Great Clips is branded as world’s largest no-appointment hair salon brand with 3,000 salons in nearly 140 markets across the United States and Canada. The salons tend to be conveniently located in high-visibility strip malls.

Services are provided by professional licensed hair stylists. Coster is professional manager hired to run the salon but is also a stylist. She is a graduate of the Transitions School of Cosmetology at Mott Community College.

“We are hiring experienced and fresh new stylists with a valid Michigan license,” Coster said. “We provide competitive wage and benefits.”

Six stylists were hired at a career open house held at the salon last weekend and more will be interviewed at another hiring fair to be held this weekend from 9 a.m. to 5:30 p.m.

Job application information is posted on craigslist.org -Flint under jobsalons. Interested people can also call 248-835-5076, or e-mail a resume to CorunnaMarketplace@gmail.com.