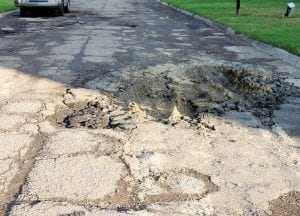 Left, a section of River Forest Drive has caved in and is surrounded by potholes.

FLINT TWP. — Driving on River Forest Drive off Beecher Road is the pits, or make that the pots as in potholes. Even that does not come close to describing a section of the road that has completely caved in.

What some residents have called “the worst road” in Genesee County has been steadily deteriorating for many years.

Carnell Smith, who lives on River Forest, appealed for help to the township board at its April 20 meeting. Smith is the latest in a long line of residents who have come to the board seeking relief for the worn out streets in the subdivision.

“A section of the road has caved in, it is not a pothole,” Smith said. Motorists must use the same side of the street to come and go, making it extremely unsafe, he said.

Smith added that he’s taken his car in for tire repairs twice so far this year. He invited township board members to come out and take a drive down his street, warning that it will take at least ten minutes to drive from one end to the other. 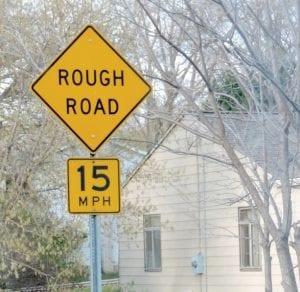 Below, a sign at the entrance to the subdivision warns unsuspecting motorists of the rough ride ahead.

“You have to be careful or you will tear up your car,’’ he said.

Residents have been told that the streets are eligible for some repairs using Community Development Block Grant (CDBG) funds, but Smith said no one given them a timetable on when that will happen.

Township Supervisor Karyn Miller assured him that River Forest would get help by mid-July or August. She explained that the Genesee County Road Commission prioritizes road projects and generally does state proj- ects before tackling subdivision roads. That is why budgeted repairs on River Forest were not done last summer as planned, because the construction season ended, she said.

The township board has set aside $98,000 in CDBG funds to address River Forest repairs. But Miller acknowledged that it would only go so far. Some of the road problems are caused by nearby apartment buildings and condos draining sump pumps in the road, she said. She has said in the past that most of the roads in River Forest are concrete which is more costly to repair than asphalt.

Available funds will be first used to address drainage issues and the heaved portion of the road, Miller said.

Trustee Barb Vert asked if anything could be done for River Forest before late summer.

Miller said that asphalt plants are just now opening up and will be beginning patching potholes within the next few weeks.