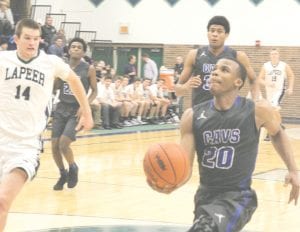 Ja’kavien Lewis gets ready to play the ball off the backboard for a dunk by Michael Fletcher during the third quarter Friday.

“Knickerbocker had 18 in the first half and we put Aaron Williams on him,” Witham said of his second-half adjustment. “He stayed with him the whole time and defended him. He did a great job not letting him get the ball, not letting him get open shots.”

Witham knew he needed to do something to slow Knickerbocker down, so he made the switch defensively that quieted Knickerbocker.

The Lightning would manage just two points in the third quarter and fell behind by double digits heading to the fourth. Michael Fletcher’s dunk off a feed from Ja’kavien Lewis put the Cavaliers in front 41-30 after three.

“We talked about at halftime that they’re going to come out and play their hardest for the first the first two or three minutes, increase their intensity and we’ve got to handle the pressure,” Lapeer coach Aaron Fisher said. “We turned it over a few too many times and that was the difference.”

Lapeer was able to close the gap to seven at 45-38 on a 3-pointer by Drew Rubick. But Carman-Ainsworth scored five of the final nine points to lock up the win.

Knickerbocker finished with 20 for Lapeer. He was held to just two points over the final two quarters.