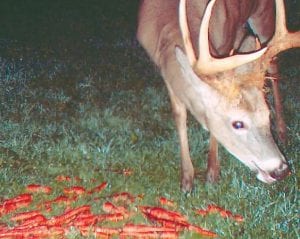 Deer seeking out nighttime snacks will see a difference this season because of the summer drought.

LAPEER COUNTY — Hunters looking for bait choices will see a definite drop in the number of apples available, but sugar beets weathered the state’s summer drought well and should be in abundance along with carrots and enough dry corn to go around.

Apples weren’t the only crop hurt by the early spring warm weather that followed with an uncharacteristic April 29 frost that killed off 90-95 percent of the state’s apple buds. Only those on the western side of the state and hit-andmiss other counties were able to escape the devastation the eastern portion of the state endured. Record-setting heat in March, then July and into August also are to blame for the low apple crop, but root crops such as sugar beets and carrots were largely untouched and farmers are seeing great harvest numbers. In fact, the state’s sugar beet crop is expected to be above average. The same early warm temperatures in the spring that caused early budding of all tress, allowed farmers to get those crops planted much earlier and the dry, hot summer helped the crops grow. An expected 163,000 acres of sugar beets is expected to be harvested in Michigan, with the first batches already being brought in from the fields as of Sept. 5.

Unfortunately, 90 percent of the apple, peach and cherry crops were hit hard and those supplies are coming from out of state, such as Washington State and New York, just to name a few. Local orchards scrambled and will have limited supplies, thanks to their neighbors on the western half of the state. They, too, though, have to save some of their good harvest for their own use and area harvest festivals that are on the schedule. Hunters aplenty also will look to possibly buy bait locally, especially if they are planning to hunt the western portion of the state.

Hunters looking for bait locally will largely make use of the boon in the sugar beet harvest, supplementing with what corn, carrots and apples they can find locally. The U.S. Dept. of Agriculture estimates that the apple crop for 2012 will be about 2.5 million bushels, a staggering 89 percent drop as compared to 2011. The last time Michigan’s apple crop was so severely reduced dates back to 1945. Bait costs will also be passed along to the hunters, who can expect to pay $6-$7 dollars for bagged fruits and vegetables.

The two-year long baiting ban was lifted last year, but hunters are again reminded that it’s illegal to bait for the upcoming deer-hunting season until Oct. 1, opening day. Bait is limited to two-gallons per 10-foot x 10-foot area and must be scattered, not heaped into a pile. The Dept. of Natural Resources and Natural Resources Council encourages hunters to move their bait locations at each site daily.