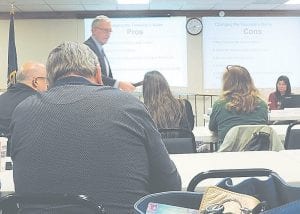 Nearing the end of its mission, the Suggestion Committee debated the pros and cons of changing the township’s name.

FLINT TWP. — Will a name change be a game changer for Flint Township’s image and economic development appeal? That was among questions probed during a meeting last week of the Suggestion Committee, a volunteer group made up mostly of residents. Now nearing the end of a nearly six-month inquiry, the committee last week debated the pros and cons of changing the township’s name. Ultimately, the consensus vote was to recommend a name change to the township board. At its previous meeting, the group debated the pros and cons of the township converting to a city but indefinitely postponed a vote on that idea.

A form has been created for suggested new names for the township and is posted on the township’s website at www.flinttownship.org. Early suggestions include Bishop or Carman Township.

The committee is scheduled to conclude its work by the end of this month with a presentation of its recommendation to the township board. It would then be up to the board to decide whether and when to place the issue before township voters.

Reasons favoring the change, generated by the Suggestion Committee at last week’s meeting included that it differentiates the township from the City of Flint; retains the township’s form of governance and present elected officials; could boost Economic Development, attract a broader job applicant talent pool, attract more residents; encourage associations/ clubs to incorporate the new identity in their name; provide a fresh start for the township; may increase property values and diminish the attraction of predatory businesses. It was also made clear that the township does not stand to benefit financially from any federal or state funds given to the city of Flint during or after the water crisis.

Some reasons opposing the name change included that it may not have the desired effect; some people like the name association with the city; the change likely will not affect zip codes; the cost is unknown; the change may not lower insurance rates and may increase property values.

The lively pro and con debate produced a variety of comments. Some questioned if the change would be construed as racist. Others said it would be a plus not being constantly asked by strangers if they are affected by the Flint water crisis and other problems happening in the city.

Tracey Tucker, township economic enhancement director, noted that some businesses have decided not to locate in the township for fear that it shares Flint’s problems, notably the bad water. She also mentioned that the township, in partnership with the West Business Association, had to take out public service announcements to help out businesses losing customers because of fears over Flint’s tainted water situation. Comments also were made about the difficulty of conducting a national job candidate search and finding that families do not want to move to the township because they associate it withFlint water, governance, crime and schools.

Some were unhappy that zip codes likely will not change and that addresses and driver’s license still would be Flint, Michigan.

One woman said her daughter benefitted from the association with Flint by being able to obtain a college scholarship earmarked for Flint students.

Several business owners are part of the committee or have expressed support for a name change.