Summer dead period is nearly upon us 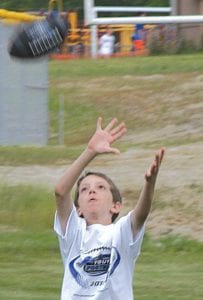 During the summer dead period, youth camps are allowed to take place, as the dead period only pertains to students in grades 7-12.

GENESEE COUNTY — The summer dead period is a period of seven full consecutive calendar days after school is out in June and after a school’s participation in MHSAA tournaments is completed where coaches and players can have no contact related to their particular sport.

Each high school in the state determines its seven day dead period (most all schools have selected a period which includes the July 4th holiday). During the dead period, there is no involvement or contact by the school or coach with students in grades 7-12 in any Michigan High School Athletic Association tournament sport. It is a zero coach-player period; at school or elsewhere. There are to be no school or coach conducted open gyms, conditioning or weight lifting programs on school premises or sponsored by the school or coach at other facilities.

The Summer Dead Period is intended to provide at least seven consecutive days when school coaches will have no contact with students in grades 7-12 of the school district in any manner related to any sport sponsored by that school. Unplanned, casual, normal community contact is permitted.

The Summer Dead Period applies to all levels of MHSAA member schools; coaches and students in grades 7-12 except that non- school summer baseball and softball practices and competitions regularly scheduled throughout the summer may continue with school coaches and students from the same district (e.g. American Legion).

Similarly to the dead period in the summer, each season also has a preseason downtime period.

The preseason downtime is also a “pause in the action” which prohibits open gyms (which in some schools has evolved into out-of-season practices) for a period of seven-to-14 days prior to the start of each season: From Aug. 1 to the start of fall sports practices, 14 calendar days before winter sports and from March 1 until the start of spring sports. Among the goals of the preseason down time are the following:

• More clearly distinguish the start of each season and its tryout period.

• Decrease the blurry line between allowed preseason activity (open gyms) and the start of tryouts and practices.

• Decrease the overlap of activity between the end of one season and the start of the next.

• Contact by a coach within the three or four player rule (voluntary, individual skill development).

The downtime period also let’s the athletes and coaches recharge their bodies and minds and come back fresh for the push to the start of the fall season.