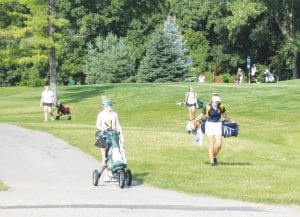 More than 100 golfers on 21 teams will invade Lapeer Country Club this Friday for the Lapeer Lightning Summer Tune-up.

Coaches will get a good long look at their teams in what will be the first competition of the season for most of them. Girls’ golf season officially opens today.

“The Tune-up is named that because it’s going to be one of the first tournaments in the state,” said Steve Carlson, coach of the Lapeer High team that will host the event. “We’ll have a variety of teams and a good mix of girls.”

“Some people don’t like it that big, but even if we had a few more teams, we would have been able to handle it,” said Carlson. “Twenty-one will end up being a good number. It will move a little faster.”

The 18-hole event was completed in less than five hours last year under the direction of tournament manager Pat Cronin, who previously managed seven Lapeer Summer Tune-ups when the tourney was hosted by Lapeer West.

Carlson didn’t hesitate to enter three Lightning squads. He had two teams in last year’s Tune-up, and they finished fifth and 10th in the 23-team field. Five players from those teams are back this year, and Carlson has several golfers on his 18-player roster coming off strong summer campaigns.

“The depth is so good that we’re able to put three teams in,” he said. “I can’t do that in another tournament.”