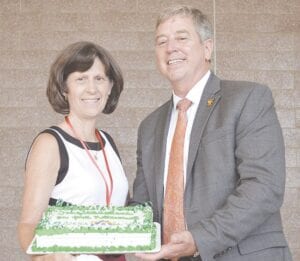 Tim Stein, alongside his wife Kelly, received a “farewell” cake to commemorate his retirement. Photo by Ben Gagnon

FLUSHING — After dedicating two decades of service to Flushing Community Schools, Tim Stein has decided to call it a career.

Stein, who held the superintendent position at FCS for 10 years, retired from the district on June 30. Former FCS Deputy Superintendent Matt Shanafelt officially started his tenure as the new superintendent on July 1.

In a show of appreciation, the Flushing School Board and members of the FCS administrative staff gave Stein a congratulatory sendoff on Tuesday night. Stein thanked the school board and his colleagues for their support, saying that the district’s progress has been a team effort.

For Stein, retirement is bittersweet. On one hand, he’s looking forward to spending more time with his family. On the other, he said that he’s going to miss working with his FCS family.

“It’s exciting to see people succeed, whether it’s students or staff, and to know that you’re supporting the process,” he said. “I’ll miss the day-to-day interaction and problem solving with the administrative team.”

During his tenure as superintendent, Stein oversaw several major school improvement projects, including the district’s most recent bond project that produced Raider Fieldhouse and new classrooms at Flushing High School. He also helped to promote advancements in STEM curriculum across district and expanded AP course offerings through the Raider Early College program.

Stein spent 23 years with Flushing Community Schools, starting as the principal of Central Elementary School and then moving up to become the district’s assistant superintendent. Prior to FCS, he taught for Fenton Area Public Schools and was a principal in the Grand Blanc Community School District.

Although he grew up in a family of educators—a group that included his father, sister and grandparents—Stein’s advent into education came gradually. As a college student, he studied criminal justice and considered going into police work or becoming an attorney.

But when educational opportunities became available, Stein went back to school and got his teaching certificate. He was soon hired to teach in Fenton and discovered that public education was his career passion.

“I enjoyed it from day one,” he said. “I loved being a teacher, then being an elementary principal. I never really thought initially that I would necessarily go beyond being a teacher, but I was encouraged at different steps along the way by staff. Next thing I knew, I was here as the superintendent.”

Looking back on his career, Stein said that making student-centered decisions helped him and the Flushing school district to navigate challenges and make educational strides.

“If you’re doing what’s in the best interest of kids, everything else falls into place,” he said.

Now that he’s retired, Stein said that he is looking forward to spending more time with his kids and grandkids and plans to do some traveling with his wife Kelly, who recently retired from her nursing career. He and his wife plan to continue living in the Flushing area.