“Happy Trails to You!” 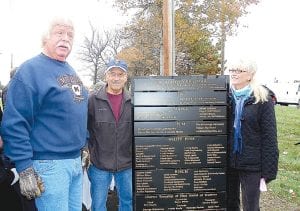 Jim McClung, chairman of the township Parks and Recreation commission stands with other commission members with a plaque listing major donors to the project.

FLINT TWP. — A ribboncutting on Friday opened the long-awaited Genesee Valley Trail and moved outdoor enthusiasts closer to having a regional trail system to bike or walk from one end of the county to the other.

The 2.6-mile non-motorized trail which extends from Linden Road to Corunna Road was cited as an important link in plans for a countywide regional trail system drawn up in 2007.

Township Supervisor Karyn Miller spoke of the next step in the regional goal to connect Flint Township’s to trails in the cities of Flint and Swartz Creek. Plans are being made to complete another leg of the township’s trail by next summer with the resurfacing of Norko Drive that will create bike lanes connecting the new trail to an existing trail in the Flint Township Park next to the police station on Norko, Miller said.

She cited key players in getting this segment of the Flint Township portion built including the Michigan Department of Transportation (MDOT), the county road commission and planning commission, the township parks and recreation commission, engineers, road construction workers and donors.

“We have traveled a long road to arrive at this destination,’’ Miller said of a project that seriously got underway in August 2010 with a decision of the Township Board of Trustees to seek donations to cover preliminary engineering fees of $42,000.

The Genesee Valley Trail was identified as one of the top five trail priority projects in Genesee County by the Genesee Regional Trail Council, which is made up of trail advocates, local units of government, county agencies, and community organizations with staff support from the Genesee County Metropolitan Planning Commission. Other top five priority projects include the Flint River Trail, the Grand Traverse Greenway, the M-15 Recreational Heritage Route Trail and the Trolley Line Trail.

“We are so excited as planners to actually see this get built,’’ said Derek Bradshaw, principal planner for the county planning commission. ”This is the project I am most proud of in the 15 years I’ve been with the planning commission,’’ he said, citing community support to help meet costs. The bulk of the project was funded with a nearly onemillion federal grant.

Burchell said she was looking forward to expanding the trail further east in coming years.

Prior to the ribbon-cutting, township officials presented certificates of appreciation to supporters including engineers who designed the trail and the Genesee Valley Center for granting an easement for the trail on mall property fronting Linden Road.

Names of major donors to the project have been inscribed on a permanent plaque that will be displayed at the trailhead on Linden Road along with a map and rules for using the trail. Miller said the most recent donation of $1,000 came from the Bay Mills Indian Community which is planning to build a casino on property it owns near the trail.

Miller said that the trail is complete except for a portion near Corunna Road which was delayed by some easement issues with a Corunna Road business. The entire trail should be open within a few weeks she said.

Among about 50 people attending the ribbon cutting were several bikers who came dressed for an inaugural ride and took off down the trail soon after the ceremony ended.

Miller concluded her remarks saying: “Happy Trails to You.’’