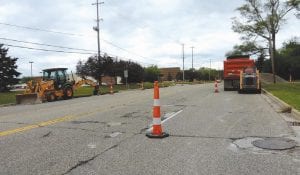 Last week, road crews started resurfacing work on Lennon Road in front of the Post Office, one of several late-summer projects in the township.

FLINT TWP. — Summer is winding down but the 2015 road construction season is going strong. Several projects started recently have targeted completion dates into the fall.

Supervisor Karyn Miller gave a brief update at a recent board meeting.

Projects include resurfacing of Lennon Road between Linden and Dye, including the bumpy patches in front of the Post Office.

That work began on Monday, August 24 and is expected to be completed by Friday, October 2, according to the Genesee County Road Commission (GCRC). Traffic will be maintained via lane shifts but motorists are advised to proceed with caution or use alternate routes.

Miller also reported that reconstruction is underway on Healthsource Boulevard between Corunna and Linden roads. That job began on August 3 and is expected to be completed on Friday, September 18. Access in open only to the HealthPlus building. All other traffic is being restricted and motorists advised to avoid the construction area.

HealthSource is a direct access road to the HealthPlus building and the Patsy Lou Williamson dealership but also is publicly used as a pass through from Linden to Corunna Road.

Miller noted that the road repairs are a cooperative project for which the road commission is paying $52,000 of costs, the township is paying $57,000, HealthPlus is paying $32,000 and Don Williamson of Patsy Lou has committed to paying up to $50,000.

“For the record, Healthsource is a public county road that is being repaired, not a private driveway,” Miller said. The road commission is required to maintain and repair this and all other public roads in Genesee County, she said.

Miller also said she would be meeting with road commission officials to work out financing details for resurfacing work on Calkins Road proposed for this year.

A change in road commission policy could increase the township’s cost in matching funds.

She also reported that scheduled work will be done in the Mandeville subdivision and on Townview Drive and Lask Street.

As for dilapidated roads in the long-suffering River Forest subdivision, repairs of badly damaged portions are slated to begin around Labor Day and be completed by the end of October, Miller said. But she stressed that it is not a road reconstruction, which will be “absolutely necessary” in the future. Township officials allocated $98,000 in Community Development Block Grant funds towards the costly repairs but have said that in the long run River Forest residents will need to agree to a special assessment to pay for reconstruction work.