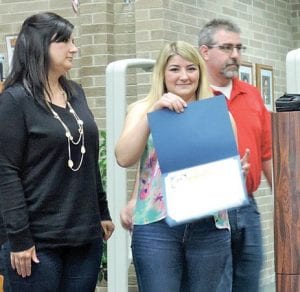 Mackenzie Travis was the surprised recipient of a scholarship presented by Carman Cougar Charities Corporation during a press conference Tuesday at the high school.

FLINT TWP. — Mackenzie Travis works in the Carman-Ainsworth High School office during third hour with a clear view of the entrance doors and people coming and going.

So a ruse was staged, including acquiring Mackenzie to give visitors a school tour, to prevent her from seeing the media and her parents arriving for a press conference.

Mackenzie was the guest of honor but didn’t know it. The guided tour and a mock press conference about the recent Hazardous Waste Collection held at CAHS were part of a ruse to surprise Mackenzie with the news that she has been selected as the very first recipient of the first-ever $2,500 Volunteer Leadership Scholarship from Carman Cougar Charities Corporation (CCCC).

Barely a year old, CCCC formed last summer to plan a reunion for alumni of Carman High School (which merged with Ainsworth in 1986). The group formerly organized as a nonprofit in October to provide ongoing assistance to C-A students and programs.

Vedder, the CCCC scholarship committee chairman, said Mackenzie was chosen because of her outstanding leadership qualities and volunteerism. Besides being a good student, she is active at her church and has participated in numerous community volunteer activities including mission work in Haiti.