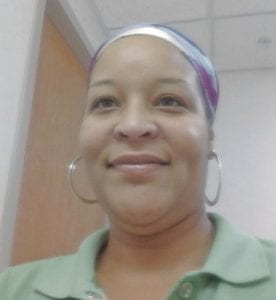 Sherrisa Hayes-Powell, 48, of Flint, was diagnosed with breast cancer in 2013 and after seeking treatment at Hurley Medical Center, she was able to meet with Marsha Schmit, a Breast Health Navigator, who helps hundreds of women find their way through an extremely difficult journey. Sherrisa has been cancer free for more than two years and expresses great appreciation to Marsha, Hurley and their breast health programs.

Editor’s Note: View Newspaper Group is proud to be a Pretty in Pink Media Sponsor of the Pink Night Palooza event. The following is the last of three articles that will provide information about Pink Night Palooza and how the event can make a big difference in the lives of women with breast cancer.

FLINT –— When you listen to Sherrisa describe the first chapter of her tour through breast cancer, you can’t help but wonder whether you’d be as strong as she was, you wonder whether you’d be as courageous, you wonder if you could do it at all. Because, to be honest, when Sherrisa Hayes-Powell, 48, of Flint, describes her diagnosis and the journey that followed, she sounds like a warrior, a soldier. She got the news, and then she put one foot in front of the other until she walked out the other side.

“Not too long ago, I was actually just thinking about the day when I was diagnosed,” she said, remembering the exact date. “I first found out in the summer of 2013. The doctor called and said that they saw something on the mammogram, but they didn’t sound very concerned, and we didn’t know what it was yet, so I remember I wasn’t that worried at first.”

She said that the normal thoughts went through her head, but she tried not to let them affect her too much. She had other things to worry about and didn’t want to get worked up over something that might turn out to be nothing.

But, she said, once the news became real to her, everything became dreamlike, surreal, as if it couldn’t possibly be true. She felt like she was watching it happen to someone else, like she was outside of her own body. She said she even had doubts about the diagnosis because of the size of the spot on the x-ray.

“It was just so small I couldn’t believe it,” she said. “But I gotta say that Greater Flint Imaging over on Linden Road really did an amazing job. I mean, they’re a big part of the reason that I’m still here and cancer-free. They found it, and it wasn’t easy to find. It was hiding behind tissue, and they still found it, so I’m so grateful to them.”

Fortunately, after accepting her difficult situation, she was able to lean on her mother, who is her confidante, the person with whom she shared everything, even before deciding to tell anyone else about the news. Sherrisa also said that she drew strength from her mom, making a promise that she would “not go before mom.”

After researching the disease and its effects, and speaking with a number of doctors and specialists, Sherrisa was able to find help at Hurley Medical Center, which is home to a breast cancer program that is the region’s leader in breast health and breast cancer treatment.

Hurley Medical Center is committed to making sure women have the information, resources, and support they need to make their breast cancer treatment experience as positive and successful as possible. To help patients through their breast cancer, the facility and its programs provide a Breast Health Nurse Navigator. In the case of Sherrisa, along with hundreds of others, that Navigator happened to be Marsha Schmit. Schmit has been a Breast Health Navigator since 2008 and helps to steer patients through the difficult journey they face after being diagnosed.

Sherrisa talks about Marsha in a way that is typically reserved for family or lifelong friends, detailing the support and comfort that Marsha provided in one of the most difficult times of Sherrisa’s life.

“I’ll tell you,” explained Sherrisa. “If you need something, Marsha knows. She helps me out all the time. Everything I need. She started helping me right away and she never stopped helping. Hurley set me up with her and she made everything so easy. I mean it. From the beginning. And she still helps me today!”

A little more than a year later, Powell finished her chemotherapy treatment and is still cancer-free.

The Pink Night Palooza event will be held at the Holiday Inn & Gateway Centre in Flint, and is scheduled for Thursday, Oct. 6 from 5-11 p.m. Tickets for Pink Night Palooza are still available and can be purchased online at www.hurleymc.com/pink.