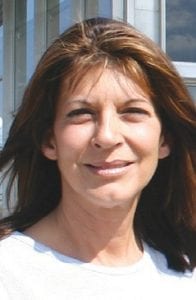 Building customer loyalty is one of the things Goldman said he’s worked hard at as co-owner of Suski Chevrolet Buick, 8700 Main St., in Birch Run.

From specials offered to his customers, down to offering free coffee to customers and anyone who walks in off the street, he said it’s all about building that relationship.

Like the Auto Cash special offered at Suski’s Birch Run Chevrolet and Buick dealership, where anyone can bring in their car and they are automatically entitled to $40 every six months per car for oil change services.

“It’s 100 percent free,” said Goldman. “There’s no gimmick. If you want to bring in your car and get an oil change and tire rotation and it comes to $42, the customer just owes $2.” 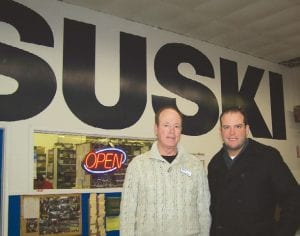 Goldman said he started the program approximately three years ago when he heard economic hard times were forcing some people to stop getting regular oil changes so they could afford to put food on the table at home.

He admits the program is costly, but believes it has helped build loyalty and has brought in new customers. Upcoming Chevrolet mandated renovations to the Suski dealership, which has been at its present location in Birch Run since 1981, will also revolve around the customer.

Goldman said the dealership is building a huge customer waiting area outside the service shop which, when complete, will offer nine TVs, a kitchen, cappuccino and coffee machines and wi-fi Internet area.

Renovations to the building will include the blue and silver exteriors most Chevy dealers are going to. Plans are to have the work completed in the coming months. 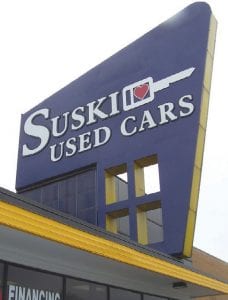 Goldman, who has been partnered with Andy Suski since 1991, said he is excited about the dealership’s expansion plans, which have included a used car lot in Flint on Dort Highway and a used car lot opening in Lapeer’s Mayfield Township on April 1 — located in the former Victor George Chevrolet dealership.

The lot will be located at the Lapeer Auto and Truck Plaza, owned by Debbie Stockman. Suski’s Used Cars will join her new Your Complete Auto Repair Service at the site on the north side of the 13-acre site and a yetto be-named auto body shop will be opening in the Plaza’s main building.

Suski, Goldman and partner Ed Usewick, who will manage the Lapeer store, expect to have 100 GM, Ford and Chrysler late model used vehicles on the lot at 1640 North Lapeer Road.

That dealership’s general manager, Kevin Puente said the location’s success has far exceeded expectations. “We have a lot of hard-to-find vehicles,” he “And people are coming from all over the country to Flint to buy them.”

Puente said they started out with low expectations, but they are selling between 15-20 cars in a month and 70- 80 through wholesale.

“Nobody else does it like us,” he said. “That’s where we came up with the slogan: ‘We’re a different dealer on Dort Highway’.”

The next used car event at the Flint location is April 11.

The company is looking to recreate that success in Lapeer County. Like the Flint location, Goldman said the company will have a staff of 15 at their Mayfield Township lot. He said they will be offering 2007 and newer vehicles, which will allow them to offer warranties.

Goldman said his staff will be able to do on-site financing through 30 different lenders at Suski Used Cars and will even be able to work with people with bad credit.