Suspicious bag at Bishop Airport turns out to be harmless

BY GARY GOULD and
RHONDA SANDERS 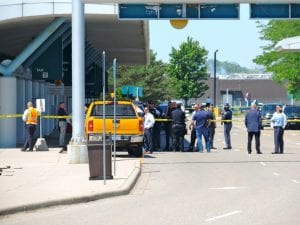 FLINT TWP. – An unattended bag caused the evacuation of Bishop Airport this morning, stranding some 200 passengers on the tarmac while authorities investigated.

State, local and federal authorities descended on the airport at around 11 a.m. today when airport security discovered an unattended bag left in the terminal.

Officials said the airport was evacuated, though planes are still arriving as scheduled.

Airport Director Craig Williams said the bag was discovered outside a gift shop and after security took a look at it, the decision was made to evacuate.

Williams told The View Newspapers bomb sniffing dogs were brought in and found no sign of explosives. The bag, once opened, containing unusual electronic wiring, but was not connected to any device.

“We decided to evacuate the terminal for everyone’s safety,” said Williams, addressing the media at about 11:40 a.m. “Federal, state and local authorities are investigating.”

Just before 1 p.m. the dogs were going to make a second sweep of the airport and if still found to be all-clear, officials would OK the deplaning of the two planes sitting on the tarmac. Williams confirmed about 200 people total were on those planes.

He advised the public to check online for delays if they are using Bishop Airport today.

Law enforcement is urging the public to avoid coming to the airport until the threat is resolved. Currently Bristol Road remains open, but slow-downs could happen.

No further information was available following the press briefing.