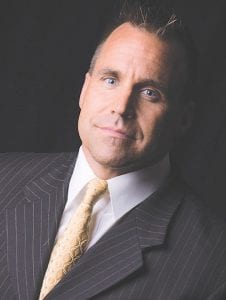 Swanson will assume the sheriff’s post on Jan. 6. He was appointed to the position at a meeting of a panel consisting of Genesee County Prosecuting Attorney David Leyton, Clerk John Gleason and Judge Jennie Barkey on Dec. 23.

The appointment was approved by a 2-1 vote, Gleason voting against the motion.

Two of those applicants, Swanson and Hart, are candidates for the four-year term as sheriff in the November 2020 election.

“Trust me, put your faith in me and let me prove my actions by what I do,” said Swanson. “Prove what I promise by what I say and what I do.”

All three candidates faced questioning by members of the committee during a two-hour meeting attended by the public, as well as supporters, opponents, family and friends of the three candidates.

Much of the questioning centered around Swanson’s career with the sheriff’s department, especially regarding his involvement in several lawsuits against the department.

Gleason asked Swanson about how many lawsuits he had been involved in at the sheriff’s department, to which Swanson replied he had been exonerated in every case. As such, he did not list the specific cases on a ques- tionnaire each candidate was asked to fill out prior to the interview process.

All three candidates were asked about the department’s finances and how each would deal with being asked to stretch the sheriff’s budget further with budget cuts looming for the county.

Swanson said the county’s battle is the same battle the sheriff’s department has, adding he’s already involved in the budgeting process. He said he met with the county’s finance coordinator about plans to restructure and reorganize the department.

“There’s no more money in the pot, reorganization requires everybody’s cooperation,” he said. “They’re going to say to us we need to make up this $11 million deficit, and the year after it’ll be $17 million. It’s going to be a long road – everybody has to give and manage the money they’ve been given.”

Leyton asked if he had knowledge of applying for and managing grants, to which he replied one of his roles as undersheriff is dealing with grants.

Swanson said the sheriff’s department only gets $20 million general funded, while it has a $31 million total budget, that includes grants and millages.

“The undersheriff role, which I have been in for 8-and-a half-years, is also the COO (chief operating officer) which means the oversight of all grants, both federal, state or even local,” said Swanson. “To say I have extensive knowledge in grants is an understatement, that is the majority of what we need to keep going through it, and I’m well versed in it.”

Hart, currently the City of Flint’s police chief, has worked previously for the Genesee County Sheriff’s Department and with the Michigan State Police, retiring as the Flint post commander.

The third candidate, Gerald J. Parks Jr., spent 31 years with the Genesee County Sheriff’s Department, and touted himself as the only one of the three who was not seeking the office in the November 2020 election.