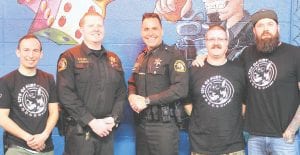 FLINT — Interim Genesee County Sheriff Chris Swanson recognized the owners of The Machine Shop in Flint, Feb. 5, for supporting Flint’s K-9 unit with the donation of funds from t-shirt’s the club has been selling.

Swanson held his weekly press briefing at the Machine Shop, 3539 Dort Hwy., Flint, where he spoke to owner Kevin Zink and his wife, Johanna, and thanked them for their efforts to support the K-9 unit.

“I’ve personally come here for some great concerts,” said Swanson. “I met Kevin Zink and realized he’s invested in this community. We support people who support this community.”

Swanson asked Zink why he partners with the police, specifically the city of Flint police department, and learned the Zinks have always “With the K-9 unit coming in there, we’re just big animal lovers. We have a bunch of dogs. Johanna just took the reins on that.

“Anything we can do for the community. Animals and 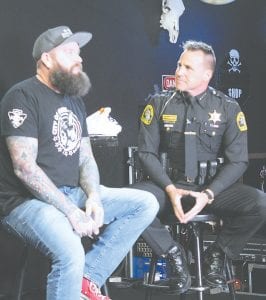 Swanson said he thinks any successful community has to have safe schools, safe places to live and safe business for people to make money.

“So education, safety and law enforcement and public safety,” he said. “It all goes hand in hand. You can’t be missing one, you have to have all three.”

Zink said the Machine Shop has a great relationship with the Flint K-9 program and has been selling shirts with 100 percent of the proceeds going right to the program. The K-9 unit, which is self-funded, needs the help, and Zink said he thinks the t-shirt sales have been go at drawing attention to the program.

“We do what we can to help up,” said Zink. “It’s actually raising awareness. More people are donating extra money when they are buying the shirt. I think it took people to realize they need that support. Hopefully we’re getting some of that out there.”

Swanson said K-9 handlers are a special part of law enforcement and he thinks K-9 handlers and partners are a unique combination – often working harder than beat cops do.

“With the patrol time and training they have to do – with K-9s for tracking, narcotics and explosives, that’s a tight knit group,” said Swanson.

Johanna Zink said the shirts were designed at High Octane Designs in Fenton and have been very popular. Currently they are only available at the Machine Shop, but she said she’d like to offer them for sale on the Machine Shop’s website in the coming weeks.