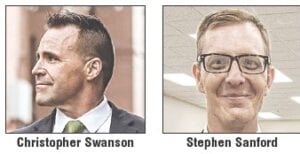 GENESEE COUNTY — Sheriff Christopher R. Swanson, a Democrat, appointed to the position of Genesee County Sheriff earlier this year, will be challenged for his seat by Republican Stephen Sanford in the Nov. 3 general election.

Swanson is a 27-year veteran of the Genesee County Sheriff’s Department from Fenton, and Sanford, a former U.S. Army Infantryman and author, is from Linden.

Here is what the candidates had to say in their own words:

Accomplishments/Goals for Community: The role of Sheriff is one of the most unique, challenging jobs in law enforcement, and is critical to protecting a community. I have been honored to serve the Genesee County Sheriff’s Office for the past 27 years, working in a multitude of roles from corrections, patrol, paramedic, investigations, and over a decade as Undersheriff.

Performing the tasks of each role in a Sheriff’s Office is the only way to uniquely understand how best the office can positively impact our community. I have taken this to heart and utilized that experience while serving as your Sheriff these past 9 months.

Protecting the most vulnerable among us is vital, and a true test of character for any community. Combating elder abuse, financial exploitation of seniors, animal cruelty, opioid addiction among our youth, and sex trafficking right here in Genesee County must continue to be top priorities in our office.

I founded the G.H.O.S.T. task force to identify and apprehend child predators who target our children online. While these criminals must be dealt with harshly, I am also increasing educational opportunities for non-violent offenders in our jail, giving them a productive pathway in life.

Above all else, a Sheriff’s Office must be a community partner. Listening to the needs and concerns of residents and giving each person we interact with the dignity and respect they have earned. We must also understand the needs of our community are diverse, and ever changing. Whether it is our paramedic division responding to medical emergencies throughout our County, going door-to-door during a Water Crisis handing out bottled water and filters, or answering a global pandemic by delivering 1 million pounds of food to those impacted locally, it is our job to always answer the challenge.

They say all that is necessary for evil to triumph is for good people to do nothing. There is nothing more descriptive of Genesee County crime rates than that statement. As my military record shows, I am not a man who can stand by and do nothing while people are hurt and killed. To do so is abhorrent.

According to a 2010 University of Iowa Study each homicide costs the community $17,250,000. Accordingly, homicides this year alone have cost Genesee County over $500,000,000. The interim sheriff has flatly rejected repeated pleas for assistance from multiple City of Flint Chiefs of police.

In the U.S. Army I was deployed to Mosul Iraq in 2005. At the time it was possibly the most violent place on earth. My unit did not approach the problem with brute force. Brute force does not work. We wrangled livestock, walked little kids to school, and sat down and listened to the needs of the community. The community learned they could trust us. They began telling us where the high-ranking insurgents, the bomb makers, and snipers were hiding out. Then we acted decisively. Community policing is important, but it only works if combined with robust investigative efforts.

I will find the violent offenders by building bonds with the community and using professionally trained investigators. I will bring in therapy dogs to help families, witnesses, and victims of violent crime. Those offenders currently walking free will be arrested and brought before the court so that our children may walk down the streets without catching a stray bullet.

I will end the corruption and mismanagement. I will do more, but I am limited to 300 words.

The Genesee County View will run more candidate profiles over the coming weeks for the various races through the county.