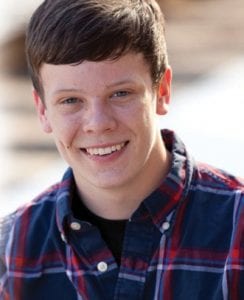 LONG POND, PA — Auto racing is a difficult and complex sport to master. However, it takes longer for some than it does for others. For 17-year old Erik Jones, a Byron native and current student at Swartz Creek Academy, the skills have come quite naturally to him since he first sat in a race car at age seven.

Jones has been competing ever since, often against men twice his age, and has turned several heads throughout the racing community. One of his top career accomplishments took place this past Saturday at Pocono Raceway in Long Pond, Penn., where Jones wrapped up the day in second place in the Pocono Automobile Racing Club of America 200.

Pocono Raceway is not an easy track to adapt to, mainly due to its three corners, all of which are at different angles, earning the track the nickname of “Tricky Triangle”. However, the challenges of the track didn’t affect the young rookie or his No. 15 Toyota Care Venturini Motorsports Camry in his runner-up finish. In fact, Jones led the race for a quarter of its duration.

Because of recent rule changes, the youngster is allowed to race at Pocono and Kentucky Speedway. Prior to the race, Jones was able to get a feel for the track and reach peak speeds in order to gain a certain level of comfort with the oddly shaped track.

“Coming out to the test was a big advantage for us today,” said Jones in a press release on his website, erikjonesracing.com. “It proved to be an asset since practice and qualifying got rained out on Friday. Starting order was determined by owner points, which the No. 15 was in fifth, so I knew we would still have a solid starting position.”

Jones was up against nine-time champion

Frank Kimmel, who controlled the lead in the early moments of the race until Jones surged to the front on lap 23. With a nine-second advantage above the rest of the field, Jones was unable to hold onto that edge due to a fuel miscalculation, leaving him coasting around the 2.5 mile track.

Difficulty re-igniting the car, coupled with a pit-road penalty, left Jones to return at the tail end of the longest line following the green flag. Jones, however, charged through traffic in the final 10 laps and narrowed the gap between he and the first-place car, missing first place by just .676 seconds, reaching 169.581 mph.