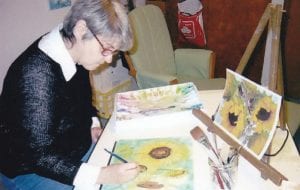 SWARTZ CREEK — Swartz Creek pencil and watercolor artist Peggy Mattson will be exhibiting her artwork at the Harvest Time Art Show and Sale on Oct. 26 from 6-9 p.m. at the Fenton Winery and Brewery in Fenton.

At the art show, she will display five original watercolor paintings and five original pencil drawings, with all ten pieces of her work being on sale to the public.

“I like showing my work and meeting people and being around other artists,” Peggy Mattson said.

Peggy Mattson will also be putting on a pencils demonstration at the event, where she will be showing people the aspects of pencil art, including shading and drawing.

“My pencils are strong,” she said. “Some people have mistaken them for photographs.”

The Harvest Time Art Show and Sale is sponsored by the Lakes Area Visual Artists (LAVA) and serves as a fundraiser for LAVA, which is a group of Fentonbased artists that promote art in that area.

Overall, there will be 17 artists exhibiting their original work at the event, with the artwork spanning across several mediums, including acrylics, pencils, pastels, jewelry and metal sculptures.

“There will be beautiful work there,” said Richard Mattson, the husband of Peggy Mattson.

In addition to the pencils demostration by Peggy Mattson, other artists will give demonstrations on acrylics, oils and watercolors. Further, there will be wine tasting and live music at the event.

Peggy Mattson has been painting with watercolors for the past fifteen years and has been working with pencils for over 50 years.

“I’ve always been inspired by pencils,” Peggy Mattson said. “You capture more detail with pencils. Pencils captures the mood of the scene.”

Peggy Mattson said about 60 percent of her work is pencils while the other 40 percent is watercolors.

“Pencils take longer, but I enjoy it a lot more,” she said.

Most of the subject matter for Mattson’s work is scenery and landscapes.

“I like almost anything that catches my eye and is unusual,” Peggy Mattson said. “I’m always questioning and wanting to get the feel of what’s there.”

Peggy Mattson said that mother nature is her biggest inspiration when she looks for something to paint or draw.

“She sees stuff that is overlooked by common eyes,” said Richard Mattson.

Peggy Mattson is a self-taught artist, having only taken a few workshops for watercolors and oils. She works everyday on her drawings and paintings.

“Sometimes I get in a zone where I’m working hours on end,” she said.

She added she can be working on as many as three watercolors and three pencils at a time.

Peggy Mattson has won several awards for her artwork, including awards from the East Tawas Art Festival, the Grant County Art Show in Indiana, the Flint Art Fair and the Luddington Art Fair.