Cast to perform Joseph and The Amazing Technicolor Dreamcoat 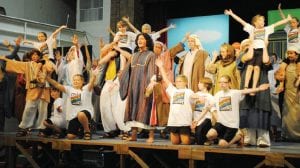 Cast members rehearse a scene in Act I of Joseph and The Amazing Technicolor Dreamcoat.

SWARTZ CREEK
— For three decades, audiences across Genesee County and neighboring counties have been entertained by the Swartz Creek Center Stage and its myriad of productions. In celebration of its 30th anniversary, the Center Stage presents the wellknown and beloved musical, Joseph
and The Amazing
Technicolor Dreamcoat.

Written by Andrew Lloyd Webber and Tim Rice, Joseph and The
Amazing Technicolor
Dreamcoat
revolves around the “coat of many colors” story from the Book of Genesis in the Bible.
The main character, Joseph, will be played by Swartz Creek resident Mike St. Cyr, who has been acting with Swartz Creek Center Stage since he was 6.

St. Cyr, 27, has decided to make acting his profession, and credits Director and Founder of Swartz Creek Center Stage Katie Thompson for exposing him to the theatrical world. “I love it and it all started with Katie,” he said. 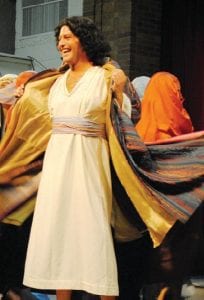 Joseph (Mike St. Cyr) shows off his “coat of many colors”.

Stepping into the role of Joseph was not too hard for St. Cyr; he played the main character when Center Stage presented the musical in 2002. “It’s fun that I’m doing the same part in the same show,” St. Cyr said. “I like the musical because it’s a fun show with a big cast. It’s a challenge, but it’s energizing and hopefully, people will be energized when they see it. We go there and we have fun.”

One of the main appeals of Joseph
and The Amazing Technicolor
Dreamcoat
is the story and its main themes. “It’s a cool show, and there are universal themes, such as family,” St. Cyr said. “In the play, I’m a dreamer and I have dreams. One of my lines is ‘Dreams come true, and it could be you.’”

Along with St. Cyr as Joseph, the musical’s other main characters include the Pharaoh, played by Paul Ray, and the narrators played by Kaylie Briggs, who started at Center Stage when she was 8, and Pat Nelson. All in all, the cast includes 35 people from Swartz Creek, Grand Blanc, Burton, Davison, Mt. Morris, Flushing, Lennon, Gaines, Flint, Linden, Holly and Fenton. “There’s quite a bit of diversity in ages of the group. We have people from 6- 70, so for all of us to work together, it’s magical,” St. Cyr said.

Preparations for the show, which officially opened July 30-31, began the last week of June and approximately 40 people auditioned for a part. Thompson said she sees many people who repeatedly audition for shows, and there is a core group of individuals who are in the shows.

“It’s a big production, and a lot of fun,” Thompson said. “We have a very talented cast and this is a very fun show. It’s something grandma and grandpa can take their kids to see.”

Founded in 1981 by Thompson, Swartz Creek Center Stage is a community theater group with members ranging in age from 8- to 80-years-old. Thompson said Center Stage initially began as a summer theater program for high school and college-age students interested in continuing their theatrical interests and aspirations during the summer. Thompson’s love of theater and performing runs deep.

“I’ve been performing since I was 5 and I studied theater in college,” she said. “I started Center Stage in 1981 to give high school and college kids something to do in the summer. Many kids were interested. We started quite small and it’s gotten quite large.”

Over the years, Thompson has watched many of her young students go on to bigger things in the world of theater. Her grandson works professionally in Chicago, and many of the kids who participated in Center Stage have gone on to careers in technical theater.

“I think Mike (St. Cyr) will go on to bigger and better things,” she said. In fact, St. Cyr, who graduated from the University of Michigan-Flint, is heading to the Stella Adler Conservatory in New York City.

Center Stage puts on three to four shows a year, including a big musical in the summer, one play in the fall, one play in the winter and then, depending when Easter falls, a spring production. Thompson said the straight plays are performed as dinner theaters, drawing approximately 100 people per show. The musicals draw between 200-250 per show. Center Stage is not a funded program; all the money generated from ticket sales goes back to the group.

Show times for Joseph and The
Amazing Technicolor Dreamcoat
are 8 p.m. Aug. 6-7 and 3 p.m. Aug. 8 at Mary Crapo School Auditorium, 8197 MIller Rd. Tickets are $8 and Thompson recommends purchasing tickets in advance. “If we sell out, we sell out,” she said. Tickets sales will be available at the door if tickets are available. For more information, including reservations, call Thompson at 810-591-4352.