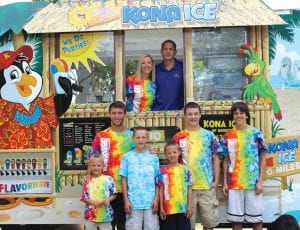 SWARTZ CREEK — Dave and Mindy Griwatsch of Swartz Creek were looking for a business they could run that would fulfill several needs.

In March they found that driving the area’s first Kona Ice truck and selling their vast array of shaved ice products fit those needs.

The Griwatsches sell shaved ice products in a variety of flavors; 40 to be exact.

“It’s a hands-on experience, the kids get to put their own flavors on,” said Mindy.

Customers choose a size of shaved ice product that they want, and then they can either choose what flavors they want by utilizing the “Flavor Wave” on the side of the truck or have the Griwatsches mix up one of the 30 other flavors inside the vehicle. All the while, the truck is equipped with multiple speakers that play a variety of tropicalthemed songs.

The Griwatsches considered the viability of Kona ice because they were hoping to find some sort of work that would be less physically demanding than Dave’s current work in customtiling. They hope to transition to the Kona Ice franchise full-time later down the road.

The Griwatsches said another one of the other things they found attractive about driving the Kona Ice truck was that the company emphasizes giving money back to the community. Kona Ice offers its services for fundraising, and they will give a percentage of their earnings back to the community and people running the events. Mindy Griwatsch said since it started in 2007, Kona Ice has given $10 million back to communities. She said that their branch of the franchise has raised about $4,000 for the community since they started their business in March.

The Griwatsches have plans for expansion, both in terms of product and area coverage. Mr. Griwatsch said that they’re looking into offering Kona Cocoa and potentially coffee when the weather gets colder, as a counterpoint to their iced products.

They are also considering adding concessions to their truck for when they cover athletic events that don’t have concession stands. They already offer several variations on their current products, with sugar-free ices and athleticoriented ices that have electrolytes.

The Griwatsches said they plan to bring more units to Swartz Creek, and are already looking into hiring more employees and expanding their business.

“We don’t plan on being seasonal. We’ll work all winter,” said Mindy.

In addition to their current vehicle, they have a miniature cart for working interior spaces.

For more information on the Griwatsches business, call them at 810- 635-9200, visit www.konaicegenesee.com, email them at geneseekona@konaice.com, or follow them on Facebook at “Kona Ice Genesee.”