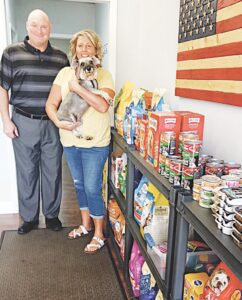 Tom and Kim Farrell, pictured with their schnauzer Miggy, maintain a pet pantry at Crown Real Estate in Carriage Plaza. The couple loves animals and wanted to give back to the community. Photo by Lania Rocha

SWARTZ CREEK — Out of a love for animals, and an understanding of what it’s like to go through lean times, Kim and Tom Farrell have found their niche in community service.

The Swartz Creek couple have started a pet pantry to help families who in are financial straits and have pets they are struggling to feed.

“We want people to be able to come to our place and take the food if they need it,” said Kim Farrell, who came up with the idea. “Spreading the word is very important, especially for senior citizens.”

“One day, a month or two ago, I was just kind of thinking I needed to do something for the community, but I didn’t know what,” Kim Farrell said, explaining how the idea evolved. “I’ve always loved animals. And I know a lot of people do need help.

“When the recession hit, we had hard times. We went through financial troubles and it was hard, every day, figuring out where the money will come from to keep everything going.”

During the lean years, the Farrells’ beloved dog, a mini schnauzer, suffered a spinal stroke, and they weren’t sure how to pay for the medical attention it required.

“People reached out to me and helped us do that,” Kim Farrell said. “I wanted to help out somehow, and I thought, ‘I’m going to help animals.’ It’s a way to give back, because so many people have been so helpful to me.”

The Farrells’ first thought was to open a mini shelter.

“We love animals,” said Tom Farrell. “But we realized we just didn’t have the time to run a shelter. We can feed them, though.”

A lot of people face financial difficulties from time to time, and reports of families having to surrender their pets because of their financial struggles was too much for the Farrells to bear.

“I know there are a lot of rescue groups and shelters, and they’re full sometimes,” Kim Farrell said. “I thought, ‘How can I help to keep people from having to give up their animals? Help feed them when they’re going through hard times!’”

The pet pantry opened four weeks ago, and so far, the community has provided overwhelming support.

“Almost every day, someone has donated,” Kim Farrell said.

“There’s really been nothing yet that we’ve turned away,” Farrell said.

The shelves that line the walls and hold the donations also were donated.

Kim Farrell also has a YouTube channel, Schnauzer Mom, on which she documents her family’s life with their mini schnauzers.

Tom Farrell also donates a percentage of the profit from real estate sales toward the purchase of more pet food. He said he and his wife hope to find a separate venue to house the pantry someday.