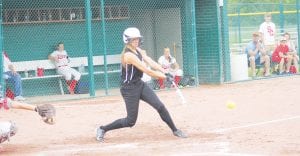 Carman-Ainsworth senior Jessica Smith puts the ball in play during last Saturday’s Div. 1 district softball tournament at Swartz Creek. Smith and the Lady Cavs saw their season end in a 10-0 semifinal loss to the host Dragons.

SWARTZ CREEK – The Carman-Ainsworth softball season came to a close on Saturday at Swartz Creek as the Lady Cavaliers fell to the host Dragons in the district semifinal, 10-0.

Swartz Creek would go on to win the district championship with a 3-2 win over Kearsley in nine innings, which was preceded by Kearsley’s 6-2 win over Flushing. — B.P.