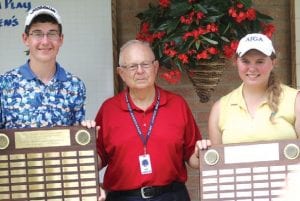 In 90-degree heat and humidity, Zyber made four birdies, including a 40-foot putt on the fifth hole.

“It helped that we were the first group out,” he said. “We got done before it was too hot.”

“I think it makes us better,” he said. “It focuses us more to try to top the others.”

Kristen Wolfe, a Powers Catholic senior and Grand Blanc resident, won the girls title. Wolfe shot 77 to beat defending champion Haylee Zyber of Swartz Creek and Samantha Moss of Fenton by four strokes. Zyber and Moss were headed out for a playoff before Wolfe brought in her winning score in the day’s final group.

The FJGA will have one more week of regular-season play next Monday, followed by the seasonending tournament July 29-31 at Swartz Creek Golf Course.