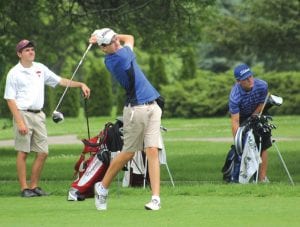 Ben Zyber, here teeing off in a July 8 tournament, has ruled the FJGA’s top division the last three weeks.

FLINT — There was no trophy at stake this time, but Ben Zyber continued his torrid play in the Flint Junior Golf Association on Monday.

In a regular outing of the 18-hole Jack Nicklaus Group, Zyber shot 5-under-par 67 at Flint Golf Club to top the FJGA’s elite division for the third straight week. The Swartz Creek senior had won tournaments the previous two weeks, taking the Mancour Cup and the Henrickson Award.

Haylee Zyber, Ben’s sister and a Creek grad now playing at Oakland University, won the girls’ championship flight with an 81. Chelsea Thomas was second with an 85, while Lapeer East’s Abby Kanasty and Grand Blanc’s Cammi Lucia each shot 93.

Sixty-seven players are eligible to play in the season-ending tournament next week at Swartz Creek Golf Course. The low-scoring eight boys and six girls from the championship flights in Monday’s first round will return to play 18 holes on Tuesday. The two individuals from each group with the low combined score will return Wednesday in a match-play format to determine the 2013 FJGA champions.