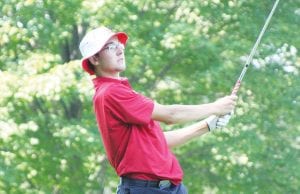 Defending champion Ben Zyber was shooting for his second straight title on Wednesday.

Defending 18-hole champion Ben Zyber finished first over two rounds of stroke play Monday and Tuesday, shooting 2-under-par 142 on rounds of 71-71, and Jack Weller was second at 72-71-143. Those two players faced off Wednesday in match play for the title after VIEW deadlines.

Mike Kelley was third at 72-74-146, missing the title match by three strokes. All three golfers were coming off a Div. 1 state championship season with Swartz Creek High this spring, and all three will play in college this fall.

Final results will be published in next week’s editions.